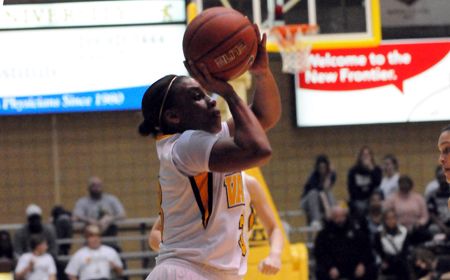 Valparaiso played solid defense and hit several timely shots in the first half, but Cleveland State rallied early in the second to defeat the Crusaders 68-58 on Saturday afternoon at the Athletics-Recreation Center.

“I’m proud of our team because we showed for 20 minutes we can play tough,” head coach Keith Freeman said.  “Now we need to get that to 40 minutes.  Until we become committed to defense we won’t win games.  We have to hold teams in the 50s.”

The Crusaders started strong, scoring the game’s first nine points on a pair of three-pointers from Rashida Ray (Fort Wayne, Ind./Harding H.S.) sandwiched around a triple from Betsy Adams (Monticello, Ind./Twin Lakes H.S.).  Defensively, Valpo forced the Vikings to miss their first six shots from the floor over the opening five minutes.

The lead grew to 10, 12-2, as Adams completed a three-point play inside at the 14:41 mark.  Cleveland State answered with six straight points, and eventually closed to within two, 17-15 with 9:13 to play before break on a basket by Destinee Blue.

Valpo answered with an 8-0 run of its own.  A three by Ashley Timmerman (Pontiac, Ill./Pontiac H.S.) and another by Ray extended the lead and after a Gina Lange (Wyoming, Minn./Forest Lake H.S.) basket in the paint the Crusaders were back on top 25-15.

The Vikings again tried to close the gap in the first half, pulling within four, but Valpo had another answer, and pushed the lead back to 33-26 at the break.

“We gave up just 26 points in the first half because we defended well,” Freeman added.  “Our main focus is on our team getting better defensively.”

Cleveland State came out of the locker room and scored the first six points of the half before an Adams layup put Valpo on the board.  Back-to-back three-point plays by Takima Keane and Shalona Winton gave the Vikings their first lead of the game, 38-35, less than four minutes into the stanza.

“We didn’t come out with the same intensity we did in the first half,” Freeman said.  “It stinks because we did all that work in the first half and gave it back in three minutes.  We came out and didn’t handle the ball well and turned it over too many times.”

A 7-0 Valpo run put the Brown and Gold back up four, 44-40 before the game began to go back-and-forth.  With Cleveland State up two, 51-49, Stefanie Lang came off of the bench to score five straight points for the Crusaders, putting the hosts on top 54-51 with 5:39 to play.

After the Vikings retook the lead, Lange gave Valpo its final advantage of the night on a layup with 3:23 left.  Shawnita Garland answered with a jumper with three minutes to play, putting Cleveland State on top for good, and starting a late 12-0 run over two-and-a-half minutes.

“The key was they got a couple of 50-50 balls late and converted them,” Freeman stated.

Adams led Valpo with 14 points while had a career-high 12 points.  Ray had a season-best nine points, making three of the 10 Crusader triples on the afternoon.

Janelle Adams led Cleveland State (10-7, 3-3 Horizon) with 15 points while Blue had 13 more.  Garland scored 10 of her 12 points after halftime while Honesty King also had 12 points for the Vikings.  Winton finished with eight second half points and 11 rebounds.

“Shalonda Winton made a difference for them,” Freeman concluded.  “She played much harder in the second half.”

The Crusaders finished the game shooting 41.5% from the floor and made 10-of-23 three-pointers (43.5%) but committed 21 turnovers.  The Vikings finished the night shooting 46.3% from the field, including 56% in the second half, and had just 14 miscues.

Valparaiso (3-14, 0-5) will return to the road on Thursday evening, heading to Chicago to face UIC.  Tip-off against the Flames at UIC Pavilion is set for 7 p.m.

Game Notes: Lange’s previous career-high was 11 points twice earlier this season … Valpo was just 4-of-6 from the free throw line while Cleveland State made 15-of-17 … Kelly Watts (Gary, Ind./East Chicago Central H.S.) started for the first time this season, scoring five points and grabbing a team-high six boards … Adams made her 15th consecutive free throw … Adams led Valpo in scoring for the 12th time this season … the Crusaders lead the all-time series 12-7 but Cleveland State has won three straight … the Vikings have won four straight at the ARC.