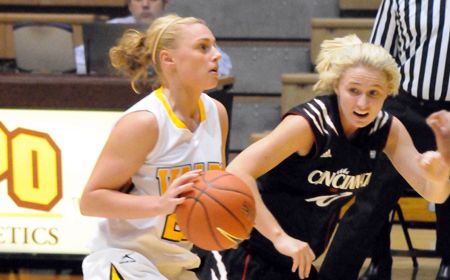 Ashley Timmerman (Pontiac, Ill./Pontiac H.S.) made five three-pointers for her team-high 15 points but Valparaiso could not overcome a cold shooting night from the floor and fell 63-42 to UIC on Thursday evening at the UIC Pavilion in Chicago, Ill.

Valpo shot just 29.8% from the floor for the night though, making just seven shots inside the three-point arc.

“Obviously we struggled to score points,” head coach Keith Freeman said.  “We didn’t put the pressure on them.  They only committed five fouls and we only shot one free throw.  We need a method of scoring around the basket.”

The Crusaders struggled from the floor to start the game, making just four of their first 18 shots over the first 12 minutes of the half.  A three-pointer by Erin Higgins, her second of the game, put UIC up 23-13 at the 7:09 mark as the Flames made their first four shots from long range.

Valpo then began to fight back.  A triple by Timmerman pulled the Crusaders within six and Kelly Watts (Gary, Ind./East Chicago Central H.S.) had a put back basket to make it 23-19.  Her offensive board was Valpo’s seventh of the first 16 minutes.

Timmerman capped a 9-0 Crusaders run with her third triple to make it 23-22 at the two minute mark.

“We got open shots for awhile, but never got the balance of scoring inside,” Freeman added.

UIC capped the first half with the final five points, including a layup by Nix with one second to play, giving the hosts a 28-22 lead at the break.

Valpo shot just 26.7% in the first half, but nine offensive rebounds resulted in 10 second chance points to keep the Crusaders close at the break.

UIC scored seven of the first 10 points out of the break to increase the lead to 10 before back-to-back triples by Betsy Adams (Monticello, Ind./Twin Lakes H.S.) and Timmerman pulled the Brown and Gold within 35-31 at the 13:30 mark.

The Crusaders then went scoreless for the next five minutes as the Flames scored 11 straight points to push the advantage to 46-31 before Timmerman’s fifth three of the night ended the drought with 8:30 to play.

Eight more unanswered by UIC pushed the lead to 20 with just over four minutes to play to put the game out of reach.

Timmerman led Valpo in scoring as the only Crusader in double figures while Tabitha Gerardot (Fort Wayne, Ind./Canterbury H.S.) added seven points.  Laura Richards (Connersville, Ind./Connersville H.S.) had a team-high seven rebounds, all in the first half.

“We have a lot of situations with this team where we don’t make the obvious play,” Freeman concluded.  “We make it more difficult than it needs to be.  We did have some kids that really played hard though and I’m proud of that.”

Valparaiso (3-15, 0-6) will wrap up its two-game road swing in Chicago with a trip to Loyola on Saturday afternoon.  Tip-off at the Gentile Center is set for 12:30 p.m.

Game Notes: Timmerman’s five triples tied a career high at Valpo … the  15 points marked her third highest scoring night as a Crusader … Valpo attempted 32 three-point field goals, tied for sixth most in a single game in school history … the Crusaders scored just 10 points in the paint … Valpo leads the all-time series 19-14 but UIC holds a 9-7 advantage in Chicago.