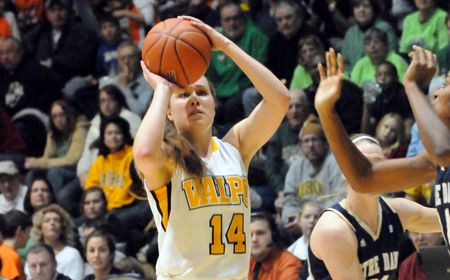 Valparaiso began its longest homestand of the season on Thursday evening, but was unable to pick up the victory as the University of Wisconsin-Milwaukee defeated the Crusaders 73-61 at the Athletics-Recreation Center.

The Crusaders started quickly, scoring six of the game’s first seven points and increased their lead to seven, 15-8 following a three-pointer by Ashley Timmerman (Pontiac, Ill./Pontiac H.S.).  Milwaukee answered with seven straight points, and eventually took its first lead of the game, 18-17, on a triple by Anne Breland.  The Panthers made their first four shots from long range.

The Brown and Gold retook the lead, 22-20, on an Adams layup at the 9:50 mark, but managed just one triple from Adams the rest of the half, going scoreless the last 6:22 of the stanza.  The defense kept Valpo in the game though, as Milwaukee managed just two points the final five minutes to take a 28-25 lead into the break.

Valpo fought back early in the second half, tying the game at 33 on a jumper by Adams at the 17:49 mark.  Six straight points, capped by a Gina Lange (Wyoming, Minn./Forest Lake H.S.) gave Valpo its final lead of the game, 43-41, with just over 14 minutes to play.

The Panthers answered with nine straight points to retake the lead.  Another 10-1 run, capping a larger 21-5 spurt, gave Milwaukee its largest lead at 14, 62-48, with 5:29 to play and Valpo could never get any closer than eight the rest of the way.

“We were very slow in transition in the second half,” Freeman added.  “Because we were slow we gave up some threes.  It’s just disheartening the way we played.  We also got beat back door.”

Lindsay Laur led Milwaukee (7-12, 4-4 Horizon) with 27 points on 10-of-13 shooting while also dishing out seven assists.  Angela Rodriguez added 16 points on 6-of-7 from the floor, including a perfect 4-for-4 from long range.  Sami Tucker added eight points and 10 boards for the Panthers.

“Laur’s a good player,” Freeman concluded.  “We didn’t have anyone that could defend her.  She impacted the game for 41 of their 73 points.”

Game Notes: Watts 11 points were a season high … Laura Richards (Connersville, Ind./Connersville H.S.) had five assists without a turnover … Adams made four triples for the game and now has at least one three in 18 of 20 games … Adams went 6-for-6 from the free throw line and now has made 21 straight dating back to Dec. 4 … Milwaukee holds the all-time series lead 11-5 including a 5-3 advantage at the ARC.