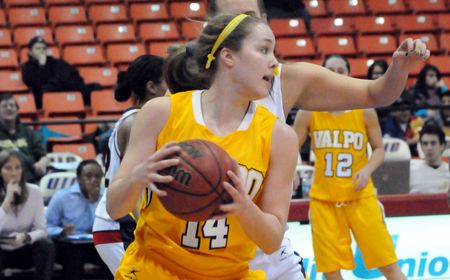 Upcoming in Crusader Basketball: Valparaiso will conclude its two-game Ohio road trip on Saturday afternoon as the Crusaders head to Youngstown State.  Valpo will look to bounce back from a six-point loss at Cleveland State in a contest which begins at 3:35 p.m. CST, three-and-a-half hours later than previously scheduled.

On the Air: Saturday’s game will be broadcast live on WVUR (95.1-FM, Valparaiso) as well as online at www.valpoathletics.com.  Keaton Gillogly and Nick Garling will be calling all of the action live from the Beeghly Center.  In addition, the game can be seen live online through the Horizon League Network.  Live stats will be available through www.valpoathletics.com for the game as well.

Head Coach Keith Freeman: In his 17th season on the Valparaiso bench, Keith Freeman has a 275-220 (.556) record at the helm of the Brown and Gold.  In his 23rd season overall, Freeman has a 404-267 (.602) career mark.  He is Valpo’s all-time winningest coach and has amassed more than half of the victories in the program’s history.

Series Notes: Valparaiso and Youngstown State are meeting for the 29th time in a series that dates back to Jan. 29, 1993.  The Penguins lead the all-time series 15-13  but the Crusaders have won four of the last six meetings between the two conference rivals which used to play against  one another in the Mid-Continent Conference.  Youngstown State holds an 8-4 edge at the Beeghly Center, but the Crusaders earned the win last year on Jan. 14, 2010, 66-41.  Earlier this year, on Jan. 13 at the ARC, the Penguins posted a 61-55 victory.

Wrapping Up Cleveland State: The Crusaders hung tough throughout most of the contest, but a 9-2 Cleveland State run in the second half proved to be the difference as the Vikings downed Valpo 57-51 on Thursday evening at Wolstein Center in Cleveland, Ohio.  Valpo shot just 25% in the second half and finished the night connecting on just 31.5% from the floor while committing 19 turnovers.  Ashley Timmerman led the Crusaders with 14 points while Tabitha Gerardot added 13 points and 10 rebounds.  Shalonda Winton led the Vikings with 18 points and 11 boards.

Scouting Youngstown State: The Penguins have lost seven straight games following a 73-56 defeat at home against Butler on Thursday evening.  Youngstown State is led by Brandi Brown, who averages 18.2 points per game, including a 20.3 point clip in Horizon League action.  She also is pulling down 9.3 rebounds per contest, including 10.2 against conference foes.  Kenya Middlebrooks adds 8.0 points per game for the Penguins.  Youngstown State is shooting just 33.8% from the floor, including 25.5% from three-point range this season while being outrebounded by 10.1 boards per night.

Earlier This Season vs. YSU: Valpo fell behind 18-5 nine minutes into the game on Jan. 13 at the ARC and could never recover, falling to the Penguins 61-55.  The Crusaders pulled within two points in the second half, but could never tie or take the lead.  Brandi Brown had 29 points and 18 rebounds for the Penguins while Kenya Middlebrooks (13 points) and Bojana Dimitrov (11 points) also tallied double figures.  Betsy Adams paced the Crusaders with 20 points while Tabitha Gerardot added eight points and nine boards.

Change in Game Times: Valparaiso’s game on Saturday at Youngstown State has been moved back to a 3:35 p.m. CST start due at the Beeghly Center.  The move is due to a memorial service that morning on the YSU campus in memory of a student killed on Saturday at an off campus residence.  The Crusaders have also announced that the Feb. 19 game versus UIC will begin at 11:05 a.m due to the men’s ESPN Bracketbuster game later that afternoon.

Gerardot Adds to Double-Double Total: Tabitha Gerardot tallied her sixth and seventh double-doubles of her freshman season over the last two games against Detroit and Cleveland State.  After scoring 15 points and grabbing 10 rebounds in the victory over Detroit, she added 13 points and 10 more boards against the Vikings.  Gerardot already had double-doubles against Cincinnati, Evansville, Coastal Carolina, Chicago State, and Eastern Illinois this year, and is second on the team in scoring at 9.9 points per game, while leading the Crusaders with 7.3 rebounds per contest.

It Had Been Awhile: Valpo’s back-to-back victories over Wright State and  Detroit last weekend marked the first two-game winning streak the Crusaders have had since winning three straight to open last season.  The Crusaders downed Indiana Tech, SIU Edwardsville, and Colorado State in succession from Nov. 14-22, 2009.  The weekend sweep in conference play marked the first time that Valpo had won both games of a league weekend since Jan. 15 and 17, 2009  when the Crusaders downed UIC and Loyola.

Guarding the ARC: Over the last three games the Crusaders have limited the number of points the Brown and Gold has surrendered from long range.  Combined Wright State, Detroit, and Cleveland State shot just 20.5% (16-of-78) from three-point range, with the Vikings’ 28.6% (6-of-21) shooting being the best during the span.  That has proven to be a winning formula for the Crusaders, as Valpo has held the opposition to just 20.3% shooting from outside the arc in the six victories this season.

Lange Produces Inside: Gina Lange has been a consistent threat inside of late for the Crusaders.  Over the last three games, the sophomore is averaging 9.3 points and 8.0 rebounds  per game for the Brown and Gold after her eight point, nine board outing against Cleveland State.  Lange has had six or more rebounds in 10 games this season while scoring eight or more points on nine occasions.

60 Was the Magic Number: Until the loss at Cleveland State, Valpo had been undefeated this season when surrendering less than 60 points in a game.

Coming From Behind: Valpo victory over Detroit last Saturday was the first time this year the Crusaders had rallied from a halftime deficit to win.  The Brown and Gold had lost 14 games this year in which the team was behind at the break.  The last time the Crusaders rallied from behind at half to win was Jan. 14, 2010 at Youngstown State.

From Deep: Betsy Adams and Ashley Timmerman rank as two of the top five Horizon League outside shooters this season.  Timmerman, a 38.6% shooter from three-point range, is fourth in the conference while Adams connects at 38.0% from beyond the arc, fifth best in the league.

Accepting Charity: After making just four of her first seven free throws this season, Betsy Adams has found her stroke at the charity stripe.  The junior guard has made her last 29 straight free throws dating back to the Coastal Carolina game on Dec. 4.  Twice this season she is a perfect 6-for-6 from the line in a game.  For the season Adams is connecting on 90.0% (45-of-50) from the free throw line.

Timmerman is Automatic: Ashley Timmerman has continued her perfection from the charity stripe on the season after making another free throw at Cleveland State.  The junior college transfer is now a perfect 22-for-22 in her Crusader career, including a game earlier this season against Coastal Carolina in which she made all eight free throws she attempted.  Timmerman was an 83% free throw shooter last year at Parkland College.

Adams Moves Into Ninth: Betsy Adams has moved into ninth place in school history for three-pointers made.  She now has 138 career triples, passing Kathryn Knoester (2000-2004).  Next up on the list in eighth place is Heidi Diefenthaler (1992-1996) with 140, just two ahead of Adams.  Betsy Adams has already made 60 threes this season, four shy of her 64 last year which ranks 10th on the single season charts.  The junior guard has made at least one trey in 22 of the 24 contests this season, being shutout against just Cincinnati and Notre Dame, when she attempted just one shot in each game.

This and That: Valpo is shooting 79.2% from the free throw line in Horizon League play, second best among conference foes ... Valpo has not won a game this season when shooting a worse percentage from the free throw line than its opponents ... Betsy Adams surpassed the 700-point mark for her career on Thursday (now has 704) ... Valpo has just on road trip remaining (Milwaukee and Green Bay) after this weekend.