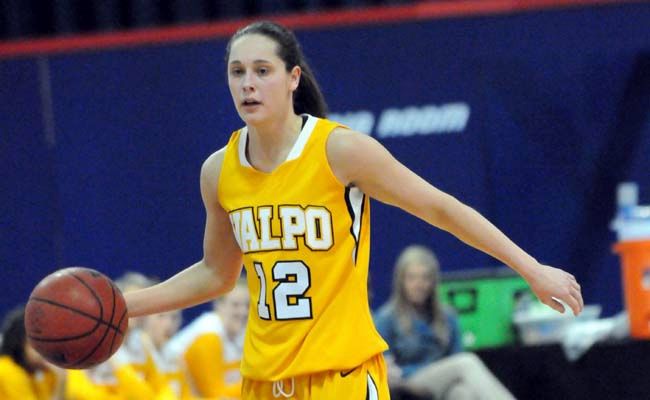 Valparaiso rallied from nine points down with just over a minute to play and had a chance to tie at the buzzer, but a three-point attempt rimmed out as the Crusaders fell 79-76 to Youngstown State on Saturday afternoon at the Beeghly Center in Youngstown, Ohio.

“We did not defend today,” head coach Keith Freeman said.  “We played three to four games in a row where we defended well and today it just wasn’t there.”

Four players tallied double figures for the Crusaders, led by Tabitha Gerardot (Fort Wayne, Ind./Canterbury H.S.), who had a career highs with 25 points and 13 rebounds for her third straight double-double.  Ashley Timmerman (Pontiac, Ill./Pontiac H.S.) added 15 points, all in the second half for Valpo, to aid in the comeback attempt.

“I thought we got some good work offensively from some kids,” Freeman added.  “Tabitha’s getting better as a player.  I liked her assertiveness posting up today.”

Valpo trailed by as many as 16 points in the second half, and still was behind by nine with just over a minute to play, before mounting a furious comeback attempt.   Timmerman started the rally with a short jumper in the lane before Laura Richards (Connersville, Ind./Connersville H.S.) registered a steal and was fouled.  She made one free throw to pull the Crusaders within six, 73-67, with 53 seconds to play.

Another steal, this time by Skyler Gick (Otterbein, Ind./Benton Central H.S.), gave Valpo the ball back and she found Timmerman open for a triple to make it a three-point game with 49 seconds to play as the Crusaders scored six points in 23 seconds.

After Tierra Jones made two free throws, Timmerman drained her third three of the half to make it a two-point game, 75-73, with 38.3 seconds left.  The Crusader defense was strong, but Bojana Dimitov scored late in the shot clock to push the lead back to four with 13.9 seconds left.

Valpo pushed the ball down court, and Richards hit a three from the left corner with 8.1 seconds left, making it 77-76, and immediately fouled.  Dimitov made two free throws with 5.5 seconds left giving Valpo one last chance.

The Crusaders pushed the ball up court and Timmerman had a good look from the left wing, but her attempt went off the back iron as time expired.

“There needs to be urgency not just in the last 10 minutes, but from the very first possession,” Freeman said.

Youngstown State jumped on top from the opening tip.  The Penguins scored the game’s first seven points and started the game making six of their first seven shots from the floor.

Brandi Brown helped lead an 8-0 Penguin run to push the advantage to 19-8 after she scored 10 points in the game’s first six minutes.

After the hosts increased the lead to 12, Tabitha Gerardot went to work offensively for the Crusaders.  The hit back-to-back three-pointers and added a put back basket at the 8:44, scoring eight straight Valpo points to bring the Crusaders within six, 24-18.

Youngstown State when on another 7-0 spurt to push the lead back to 11, 37-26, with just under five minutes to play before halftime, and the Penguins took a 44-34 lead into the locker room.

“They could score any way they wanted in the first half,” Freeman added.

Gerardot tried to keep Valpo in the game, tallying 16 points in the opening 20 minutes while grabbing six rebounds.  Adams also added 11 for the Crusaders, but the Brown and Gold made just 4-of-9 first half free throws as a team.

Betsy Adams (Monticello, Ind./Twin Lakes H.S.) and Richards joined Gerardot and Timmerman in double figures, scoring 13 and 11 points respectively.  Gick added eight points and she and Adams each had four assists as well.

Valpo shot 48.4% from the floor in the second half on the way to a 43.8% shooting night overall, and committed just 12 turnovers.

“We only turned the ball over 12 times and got to the line 20 times today,” Freeman concluded.  “We did good things on offense but defensively it wasn’t even close to being good.  We have to be better than that.”

Brown led Youngstown State (4-20, 2-12 Horizon) with 28 points on 11-of-14 shooting and grabbed five rebounds while Middlebrooks added 23 points, making seven triples, six in the second half.  The Penguins finished the night shooting 48.3% from the floor and had just 11 miscues.

Game Notes: Valpo’s 76 points were a season high … Gerardot’s previous career high was 17 points against Evansville and Chicago State … Gerardot matched her career high of 13 boards, the fourth time she had that number of rebounds … Gick’s eight points matched a season high … Richards’ 11 points tied her career high … Gerardot’s double-double was her third straight and eighth of her freshman campaign … Adams made six more free throws in the game, and has now made 35 straight dating back to Dec. 4 … Timmerman made two more free throws and is a perfect 24-for-24 on the season … Youngstown State leads the all-time series 16-13 and won both meetings this season … the Penguins hold a 9-4 series edge in Youngstown.