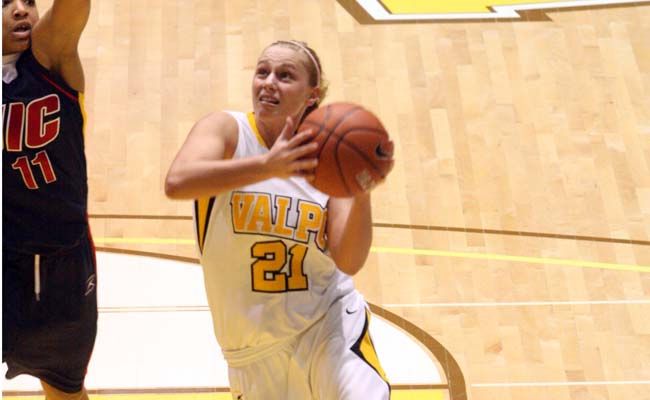 Valparaiso held the lead heading into the final five minutes on Saturday morning, but UIC finished the game on a 16-7 run to defeat the Crusaders 69-64 at the Athletics-Recreation Center.

“They hurt us by converting turnovers into points,” head coach Keith Freeman said.  “At the same time, we did a much better job today adjusting their shooting percentage.  The first time we played them (a 63-42 UIC win) they shot 47% and today they only shot 39.  We have a chance to win when they are at 39.”

The first half started as a game of runs as the Crusaders quickly jumped out to an 8-3 lead just over three minutes into the game.  UIC answered with seven straight points as part of a 12-3 run to take a 15-11 advantage at the 12:37 mark.

The Crusaders notched a 10-0 run of their own to retake the lead, with Gerardot scoring five points during the spurt, including a three which made it 26-18.  Back came UIC as Taylor Foulks scored four straight points and Shameia Green added a triple to pull the Flames within one.

Valpo never gave up the lead before halftime, though, taking a 37-35 advantage into the break.

Rashida Ray (Fort Wayne, Ind./Harding H.S.) hit a three on Valpo’s first possession of the second half and Gerardot followed with another triple to make it 43-35 just 41 seconds out of halftime.  Neither team would score for the next three-and-a-half minutes though, as the Crusaders misfired on seven straight possessions while trying to extend the lead.

“I thought we missed some scoring opportunities at this point,” Freeman added.  “It seemed like for a while the game stood still and nothing happened either way.”

An 8-0 UIC run, started with back-to-back threes by Foulks, tied the game at 45 at the 13:36 mark.  Betsy Adams (Monticello, Ind./Twin Lakes H.S.) sandwiched a pair of baskets around a bucket by Ashley Timmerman (Pontiac, Ill./Pontiac H.S.) to give Valpo a six-point advantage again, only to see the Flames retie the game at 53 with under nine minutes to play.

With the game tied at 57, Timmerman connected from long range to put Valpo on top by three with 5:25 to play, the Crusaders final lead of the game.  A Briana Hinkle jumper at the 4:19 mark put UIC on top for the first time since midway through the first half, and the Flames would not relinquish the lead.

Gerardot scored down low with 2:11 to play to pull Valpo back within one, 65-64, after UIC took a three-point advantage, but the Crusaders would not score the rest of the way.

Hinkle led UIC (12-13, 7-7 Horizon) with 19 points while Foulks added 15 points.  Jasmine Bailey added 12 points and 11 rebounds, 10 of the boards coming in the second half.  Green also finished in double figures for the Flames.

“Hinkle hurt us with penetration and Jasmine Bailey played well on the boards in the second half,” Freeman concluded.

Valparaiso (7-20, 4-11) will begin its final road trip of the season on Thursday evening, traveling to Wisconsin to take on the nationally-ranked Phoenix of Green Bay.  Tip-off is set for 7 p.m. at the Kress Center in Green Bay.

Game Notes: Gerardot’s string of four straight double-doubles came to an end … Valpo did not shoot a free throw in the second half … Gick made her first start of the season and recorded a career high two blocked shots … cancer survivors were honored prior to the game as part of the WBCA Pink Zone initiative … Valpo leads the all-time series 19-15.