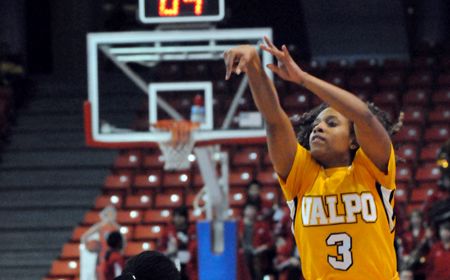 Rashida Ray (Fort Wayne, Ind./Harding H.S.) scored a career-high 21 points for Valparaiso on Saturday afternoon, but the University of Wisconsin-Milwaukee hit the game-winning jumper with 4.9 seconds to play to defeat the Crusaders 70-69 at the Klotsche Center.

Ray made 7-of-8 three-point attempts, tied for the fourth most triples in Crusader history for a single game, and her 87.5% shooting for the game set a new Valpo mark.

“Ray had a great game,” head coach Keith Freeman said.  “She shot well from three and handled the ball well.  She wants to win and is just an all-around great character person.”

Valpo got off to a slow start from the floor as the Crusaders made just one of their first seven shots to start the game.  Ray kept Valpo close, tying the game at nine nearly seven minutes into the contest with her third triple of the game.

Ray continued to account for all of Valpo’s scoring early, as her fifth three in as many attempts retied the game at 15 with 9:27 to play in the half.  While the senior was perfect from the floor to that point, the rest of the Crusaders were combined 0-of-15 shooting.

Tabitha Gerardot’s (Fort Wayne, Ind./Canterbury H.S.) finally put another Crusader into the scorebook at the 6:34 mark, dialing up long distance, before Betsy Adams (Monticello, Ind./Twin Lakes H.S.) added two free throws to give the Brown and Gold a 20-18 lead.  For Adams, the free throws were her 36th and 37th consecutive makes dating back to Dec. 4 against Coastal Carolina.

Skyler Gick (Otterbein, Ind./Benton Central H.S.) continued Valpo’s long range prowess, connecting with 3:21 to play before break to make it 28-25 Crusaders.  Valpo made eight of its first 10 from beyond the arc to start the game.

Ray added her sixth three of the half, giving her a career-high 18 points in the first half alone, at the 2:07 mark.  Milwaukee scored the last six points of the half though on back-to-back triples by Anne Breland to take a 38-35 advantage into the locker room.

Valpo finished the first half 9-of-12 from long range compared with just 3-of-19 inside the arc.  Milwaukee made 6-of-11 from three-point range in the first half as well.

Ray added her final triple of the game to open the second half, and Gerardot followed on the next possession with a three of her own to put the Crusaders in front.  Valpo opened the second half on a 10-0 run to build a 45-38 lead.

The Crusaders extended the lead to 10, 52-42, with 13:42 to play in the game before the Panthers answered with four straight points.  Kelly Watts (Gary, Ind./East Chicago Central H.S.) added a three-point play inside to push the lead back to 55-46 with just over 12 minutes to play.

Valpo then went four-and-a-half minutes without scoring as Milwaukee answered with a 9-0 run to tie the game with eight minutes to play.  Maegan Callaway (Mooresville, Ind./Mooresville H.S.) put the Crusaders back on top with four straight points inside.  Callaway scored eight straight Valpo points giving the Brown and Gold a four-point lead, 63-59, with five minutes remaining.

The lead was six following a Callaway basket inside with just under two minutes to play before Lindsay Laur drained a three and added two free throws one possession later to cut the advantage to one with 55 seconds to play.

After a Crusader miss, Courtney Lindfors made two free throws to put the Panthers up by one, Milwaukee’s first lead since the opening seconds of the second half.  Betsy Adams (Monticello, Ind./Twin Lakes H.S.) put Valpo back on top by one, hitting a runner with 19.4 seconds to play.

Laur then hit the game-winning shot on a jumper from 10 feet in the lane with 4.9 seconds left.  The Crusaders had one last chance, but Gick’s runner from the elbow went just long.

“Laur made some great plays down the stretch,” Freeman said.  “We held her in check until then as Watts and (Gina) Lange did a good job defending her.”

Four Crusaders finished the game in double figures, including Ray’s 21 points.  Gerardot had 12 points while Callaway added a career-high 10 points, all in the second half.  Gick also had 10 points and seven assists while Watts pulled down a season-high nine rebounds.

Valpo shot 68.8% (11-for-16) from three-point range for the game, the second best single game percentage in school history, and connected at 41.9% overall from the field.

“I’m pleased with our kids and how hard they played,” Freeman added.  “Our effort was there and we made a great deal of progress from the first time we played them.”

Lindfors led Milwaukee (11-16, 8-8 Horizon) with 18 points while Laur and Breland added 13 points each.  Laur also pulled down nine rebounds.  Angela Rodriguez was the fourth Panther to tally double figure with 12 points and also had five assists.

“Lindfors hurt us in the low post,” Freeman concluded.

Valparaiso (7-22, 4-13) has a week off before returning to the Athletics-Recreation Center next Saturday afternoon to close out the 2010-2011 regular season.  The Crusaders will host instate rival Butler on Senior Day with tip-off slated for 1:35 p.m.