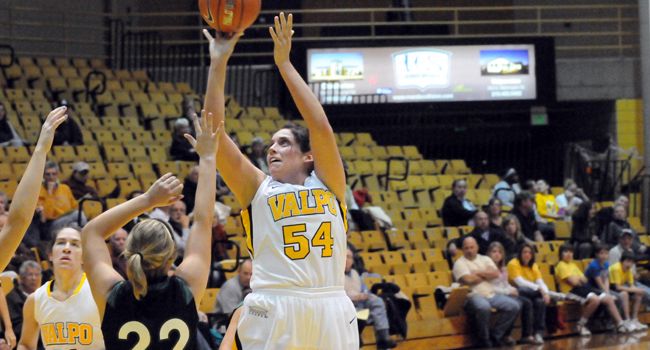 Mallory Ladd (Evansville, Ind./Memorial H.S.) scored 18 points and grabbed 17 rebounds in her Valparaiso debut and the Crusaders limited Huntington to just 15.9% shooting from the floor as the Crusaders cruised to a 77-27 exhibition victory on Tuesday evening at the Athletics-Recreation Center.

“I was pleased with our effort tonight,” head coach Keith Freeman said after the game.  “We had three freshmen on the floor and they all have an enthusiasm to play.  All of our freshmen have the ability to contribute.”

Ladd made 9-of-14 shots from the floor, picked up three offensive boards, and added two steals in 20 minutes of action in her first action as a freshman.

“Mallory is getting better every day in practice,” Freeman added.  “She hasn’t had any let up in any one of our 21 practices to date.  She has a passion to play basketball.”

The Crusaders struggled early, missing their first 10 shots from the floor while falling behind 5-0 over the game’s first four minutes.  A Ladd put-back basket broke the ice for Valpo, as the Brown and Gold scored the next nine points and never trailed the rest of the way.

A 16-2 run over eight minutes midway through the first half broke the game open, and Valpo scored the final 11 points of the opening stanza as the Crusaders took a 36-15 lead into the locker room.

Valpo made seven of its first nine shots in the second half as part of a 25-2 run to build a 65-22 advantage at the 8:22 mark and never looked back.

Ashley Varner (South Bend, Ind./Washington H.S.) scored 17 points in her first action in over a year after missing all of 2010-2011 with a knee injury.  She added four rebounds and a pair of assists in 28 minutes on the floor.

“If you have guts and character you take the hard knocks in life and come back stronger,” Freeman said.  “Ashley took a hit and has come back from a tough injury stronger.  She’s tougher now for going through hit.  We need her on the floor and we’re going to challenge her.”

“Huntington College has a lot of their core kids back this year,” Freeman concluded.  “They are ranked 13th in the nation preseason in NAIA.  Coach (Lori) Culler has done a great job with their program.”

Valparaiso will wrap up exhibition play on Saturday afternoon hosting Saint Joseph’s (Ind.).  Tip-off is slated for 1:35 p.m. at the Athletics-Recreation Center.