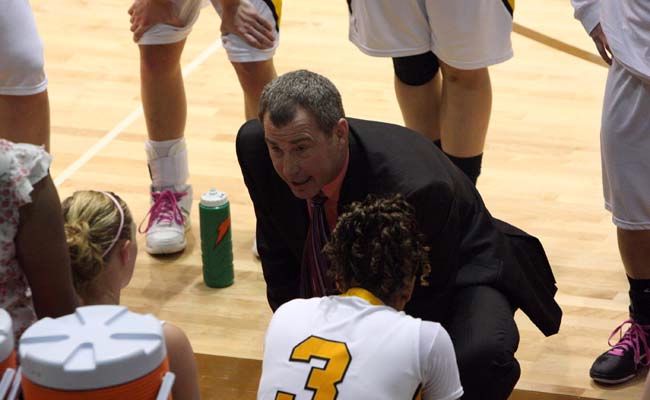 Coach Freeman has announced the addition of three new players for next season. (Rick Welton)

Valparaiso University women’s basketball coach Keith Freeman has announced the signings of three student-athletes to National Letters of Intents to play for the Crusaders.  Joining the Crusader program are Abby Dean, Sarah Godwin, and Jessi Wiedemann.

“All three of these players will give us tremendous versatility on the perimeter,” Freeman said of the signing class.  “They can score in a variety of ways and will strengthen our perimeter.  Also, they are all excellent student-athletes.”

Dean is a 5-10 guard from Carmel, Ind.  She averaged 11 points, 4.8 rebounds, and 2.1 assists per game for Carmel High School as a junior.  An All-County Team selection last season, she helped guide her team to sectional and regional titles.  She has also been invited to the Top-100 workout in the state of Indiana.

“Abby plays for one of the top programs in the state,” Freeman stated.  “She is a versatile athlete who is a very sound multi-dimensional player.”

Godwin is a 5-10 guard from Yardley, Pa.  She averaged 9.5 points and 5.6 rebounds per game as a junior for Princeton Day School in New Jersey before an injury sidelined her for the second half of the season.  As a junior, her team advanced to the semifinals of the Mercer County tournament for the first time in school history and advancd to the finals of the Prep B state tournament.  As a sophomore, Godwin poured in 11.3 points and grabbed 4.7 rebounds per night while handing out 3.4 assists.  She plays AAU for the Philadelphia Belles.

“Sarah is a very good shooting guard,” said Freeman.  “She has size and strength.  She plays for an excellent high school coach and a great AAU program.”

Wiedemann is a 6-0 guard from Palatine, Ill.  She averaged 11 points, three rebounds, and made 50 three-pointers as a junior for Fremd High School as a junior.  An Honorable Mention All-State selection last year, she helped lead her school to a regional title.  She also was named to the Northwest All-Area Team for 2010-2011.  Wiedemann played AAU for Midwest Elite, winning a national division championship in 2010 in the 17/16U division.

“Jessi is a versatile perimeter player who can play three different positions on the court,” Freeman stated.  “She is a very good passer as well as a great shooter.  She comes from an excellent high school program at Fremd and a solid AAU program.”

All three players will enter Valpo as freshmen for the 2012-2013 season.