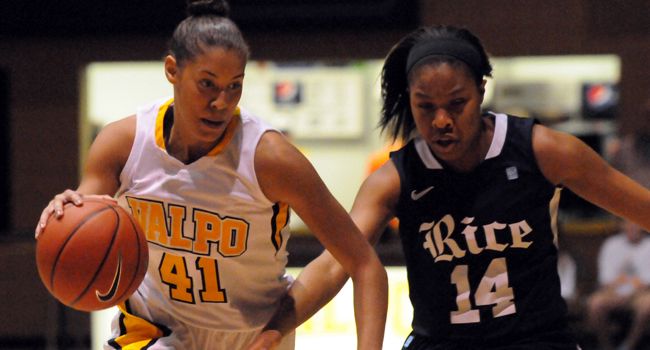 Valparaiso cut a 13-point halftime deficit to three late in the game on Sunday afternoon, but Rice hit a pair of big shots and the Owls spoiled the Crusaders’ home opener with a 54-46 win over the Brown and Gold at the Athletics-Recreation Center.

The Crusaders trailed 36-23 at halftime, and the deficit was still 12, 47-35 with 11:24 to play in the game.  Valpo’s defense stiffened, holding the Owls scoreless for nearly eight-and-a-half minutes was slowly climbing back into the game.

“We did a very good job defensively in the second half,” head coach Keith Freeman said after the game.  “Our rebounding was very good and we did a much better job as the game went along being more patient on offense.”

Mallory Ladd (Evansville, Ind./Memorial H.S.) scored four straight points to close within eight at the 7:24 mark, and two minutes later Lange scored inside, making it a six-point game.  After the Crusader defense forced a five-second violation by Rice, Ladd drained a triple from the top of the key, bringing Valpo within three, 47-44, with 4:53 to play in the game.

“We got some really nice looks down the stretch,” Freeman added.  “We took care of the ball much better and defensively we did a better job of controlling the game in the second half.  We really fought on the boards.”

The Crusaders forced a pair of missed shots by the visitors, but were unable to capitalize, and D’Frantz Smart scored on back-to-back possessions, including a triple, to push the Rice lead back to eight and put the game out of reach.

Valpo held Rice (3-2) to just 18 second half points and forced eight turnovers during the final 20 minutes to help close the deficit.

“I liked the fact that they scored just 18 points in the second half,” Freeman said.  “When the ball was on the ground we had the players going after them.  They may have been bigger than us, but we gave great hustle and effort.  They can really put points on the board.  I’m proud of where we have come from last week, and look for continued improvement moving forward.”

The Owls built their advantage with a 17-4 run over 10 minutes in the first half.  The Crusaders committed 11 first half miscues and shot just 31% from the floor before halftime.

Ladd scored all nine of her points, and had seven of her team-high 11 rebounds, in the second half while Tabitha Gerardot (Fort Wayne, Ind./Canterbury H.S.) added eight points and eight rebounds for the Crusaders.  Valpo outrebounded Rice 45-37.

Jessica Kuster led the Owls with 15 points and 11 boards while Smart added 10 points.  Christal Porter came off of the bench to score eight points and grabbed a game-high 12 boards.

“Kuster is a great player,” Freeman concluded.  “There’s a reason she was the Newcomer of the Year in Conference USA last year.”

Game Notes: This was the first meeting ever between Valpo and Rice … the Owls were a WNIT participant last season and are picked second in Conference USA this year … Lange’s previous career high was 13 points in the season opener at SIU Edwardsville … Laura Richards (Connersville, Ind./Connersville H.S.) played all 40 minutes … Valpo was 6-of-7 from the free throw line and is now 26-of-32 (81.3%) on the season … Ladd had three steals.