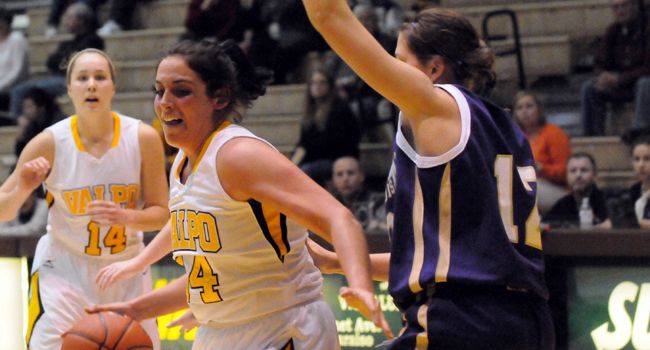 Valparaiso jumped out to a 14-point first half lead, but Western Illinois went on a big run spanning both halves to rally and defeat the Crusaders 67-55 on Tuesday evening at the Athletics-Recreation Center.

Gina Lange (Wyoming, Minn./Forest Lake H.S.) tallied a career-high for the third straight game and Mallory Ladd (Evansville, Ind./Memorial H.S.) was one rebound shy of a double-double, but the Crusaders could not overcome 29.9% shooting on the night.

The Crusaders started the game strong, building a 15-4 lead 10 minutes into the contest.  Valpo’s defense forced the Leathernecks to start the game shooting 1-of-13 from the floor while taking the early lead.  After Western Illinois cut the lead to four, 17-13, the Crusaders went on a 12-2 run, capped by a jumper from Ladd, to take a 29-15 advantage at the 2:49 mark of the opening half.  Ladd and Lange each had nine first half points helping to build the advantage.

“The first 18 minutes of the game we played great position defense,” head coach Keith Freeman said.  “Then the game got physical and we need to rise to that level.  To their credit they got into our ball handlers and the point of the screen.”

The Leathernecks responded with a pair of three-pointers by Michele Salvatori before halftime though to close within eight, 29-21 at the break.

Western Illinois started the second half with the first nine points to cap 15 straight points spanning both halves and take its first lead of the game, 30-29, with 17:24 to play.  The Leathernecks would grow the advantage to seven, 38-31, to cap a 23-2 run.

“In the second half we created a lot of offense for them in transition,” Freeman added.  “We had two people guarding one of their players and lacked communication.  That’s my fault and something I know we need to work on.”

Valpo fought back to within two, 40-38, as Laura Richards (Connersville, Ind./Connersville H.S.) went to the hole for a lay-in, but that would be as close as the Crusaders would get the rest of the way.  The Brown and Gold shot just 24.2% in the second half from the floor and finished the night 3-of-15 (20%) from three-point range.

“We weren’t able to get the ball up court quickly tonight,” Freeman said.  “With zero fast break points we didn’t have any way of getting easy baskets.  Our missing shots then affected our defensive pressure.  I’d like to see our defense sustain a high level despite our offensive production.”

Salvatori led Western Illinois (2-2) with 18 points and 11 rebounds while Brittany Demery also had a double-double with 15 points and 10 boards.  Sadie Webb added 17 points for the Leathernecks, as the visitors shot 48.4% in the second half.

The Crusaders outrebounded for the first time this season, 46-45, but committed a season-low 12 turnovers.

Valparaiso (0-3) will head west for the Omni Hotels Classic in Boulder, Colo. beginning on Friday evening.  The Crusaders will face tournament host Colorado in game two on the opening day of play with tip-off slated for approximately 8:30 p.m. CST.

Game Notes: Valpo leads the all-time series with the Leathernecks 19-16 … this was the first meeting of the two former Mid-Continent Conference rivals since 2007 … after shooting 81.3% from the free throw line over the first two games of the season, Valpo was just 12-of-20 (60%) on Tuesday night … Richards scored a season-high six points … Lange hit two three-pointers for the first time in her career … Ladd had three steals for the second straight game.