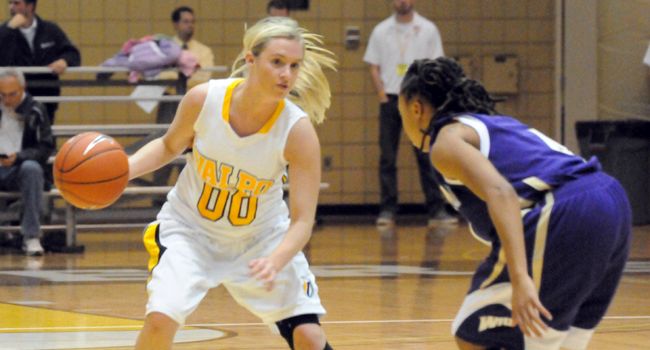 Upcoming in Crusader Basketball: Valparaiso heads to the Rocky Mountains and Boulder, Colo. on Friday evening for the Omni Hotels Classic looking to record its first victory of the season.  The Crusaders will face tournament host Colorado in the first round before battling either Wisconsin or Montana State on Saturday night.

On the Air: Friday’s game will be carried live on WVUR (95.1-FM, Valparaiso) and online at valpoathletics.com.  Chris Kleinhans-Schulz and Renee’ Turpa will call all of the action live from the Coors Events Center.  Live stats will be available through valpoathletics.com for all games this season as well.

Head Coach Keith Freeman: In his 18th season on the Valparaiso bench, Keith Freeman has a 276-229 (.547) record at the helm of the Brown and Gold.  In his 23rd season overall, Freeman has a 405-276 (.595) career mark.  He is Valpo’s all-time winningest coach and has amassed more than half of the victories in the program’s history.

Series Notes: Valparaiso and Colorado are meeting on the hardwood for the first time ever.  The Crusaders are 1-1 all-time against teams currently in the Pac-12.  Valpo lost at Oregon 60-47 on Nov. 15, 2003 in the opening round of the Women’s Sports Foundation Classic.  The Crusaders posted a 56-50 victory at Washington State one year later on Dec. 21, 2004.

Wrapping Up Western Illinois: Valparaiso built a 14-point lead late in the first half, but the Leathernecks scored 15 straight points spanning the two stanzas to rally and defeat the Crusaders 67-55 on Tuesday evening at the ARC.  Gina Lange led Valpo with a career-high 16 points while also pulling down seven rebounds.  Mallory Ladd just missed a double-double with 11 points and nine boards.  The Crusaders shot just 29.9% from the floor for the game though, including just 24.2% in the second half.  Michele Salvatori led Western Illinois with 18 points and 11 boards.  Valpo was outrebounded for the first time this season, 46-45.

Scouting Colorado: The Buffaloes remain perfect on the season after notching a 72-53 victory over instate rival Colorado State on Sunday afternoon.  Four players are averaging in double figures for Colorado, led by Chuky Jeffery who is scoring 14.7 points per game.  A 57.6% shooter from the floor, she is also pulling down a team-best 8.0 rebounds per game.  Lexy Kresl and Brittany Wilson each add 13.3 points per night while Jen Reese has scored 11.0 points per game on the season.  As a team the Buffaloes are shooting 48.9% from the field and are forcing its opponents into 21 turnovers per contest.  In Colorado’s first season in the Pac-12, the Buffaloes are picked to finish 11th in the preseason poll.

It’s Tournament Time: Valpo is playing in an in-season tournament for the fifth straight season.  Last year the Crusaders participated in the season-opening Preseason WNIT, posting a 1-2 record, while splitting a pair of games in December at the Aces Classic hosted by Evansville.  Valpo has not won a tournament since the 2008 Coors Rocky Mountain Invitational.

Looking to Repeat the Last Visit to the Rockies: The Crusaders will be looking for more of the same success the last time the Brown and Gold traveled to Colorado.  Valparaiso’s last visit to the Rocky Mountains was a prosperous one for the Crusaders Nov. 28-29, 2008.  Valpo traveled to Fort Collins, Colo. for the Coors Rocky Mountain Invitational and posted a 64-53 win against host Colorado State in the opening round.  The Crusaders then shocked eventual Atlantic Coast Conference champion Florida State 80-74 in the championship to take home the tournament crown.

Another Day, Another Career High: Gina Lange continues to register career high after career high, game after game, this season.  The junior registered her third straight career high with 16 points on Tuesday evening against Western Illinois, two days after setting her previous best of 15 against Rice.  Lange entered the season with a career high of 12 points and quickly bettered that total with 13 points in the season opener against SIU Edwardsville.  This year she leads the Brown and Gold averaging 14.7 points per game, a total that ranks 10th in the Horizon League, while shooting a team-best 52.9% from the floor.

A Model of Consistency: Tabitha Gerardot, Valpo’s fourth leading scorer on the season, has produced the same results in all three games this season.  The sophomore forward has tallied eight points in each contest for the Crusaders.  She has been nearly flawless at the free throw line on the year, shooting 88.9% from the charity stripe, tied for ninth in the conference.

Posts Accepting Charity: Valparaiso’s three-post rotation of Mallory Ladd, Tabitha Gerardot, and Gina Lange have all made the opponents pay for fouling the trio this season.  The three players are a combined 22-for-25 (88%) from the charity stripe on the year.  Ladd is seventh in the Horizon League shooting 90.9% (10-of-11) while Gerardot is at 88.9% (8-of-9).  Lange has missed just one try as well, making four-of-five from the stripe.

Cutting Down on Turnovers: Valpo turned the basketball over a season low 12 times on Tuesday evening against Western Illinois.  The Crusaders’ turnover number has dropped significantly in each of the three games this year.  Valpo opened the season with 25 miscues against SIU Edwardsville, the most turnovers by a team in the Horizon League for a game this season. The improvement began to show Sunday against Rice as Valpo turned the ball over 17 times before committing just the 12 on Tuesday night.

Crashing the Glass: Valpo ranks second in the Horizon League with a +8.0 rebounding margin through the first three games of the year.  The Crusaders outrebounded both SIU Edwardsville and Rice by substantial margins before being outrebounded by just one, 46-45, by Western Illinois on Tuesday.

Playing a Lot of Minutes: Laura Richards came out of the basketball game for 2:02 on Tuesday night, all in the first half.  That is the only game action the junior has missed over the last two contests.  Richards played all 40 minutes on Sunday against Rice after playing 40 of the 45 minutes in the overtime opener against SIU Edwardsville.  The Crusader point guard leads the Horizon League playing 39.3 minutes per contest.

Gerardot Earned Postseason Honors Last Year: Tabitha Gerardot was named to the Horizon League’s All-Newcomer Team as a rookie last season.  Gerardot had nine double-doubles as a freshman and averaged 10.7 points per game.  Her 7.4 rebounds per contest led the Crusaders.

Adams Named Preseason Second Team: Betsy Adams was named to the All-Horizon League Preseason Second Team  in voting done by the league’s head coaches, media members, and sports information directors.  Adams led Valpo in scoring with 12.6 points per game last season and finished fourth in the conference making 2.2 triples per contest.  She was ninth in the Horizon League making 34.9% from three-point range on the year.

Crusaders Have Co-Captains: Head coach Keith Freeman has announced that the Crusaders have co-captains for the 2011-2012 season.  Serving in that role are fifth-year senior Ashley Varner along with senior Betsy Adams.

This and That: Jessica Carr made her collegiate debut on Tuesday against Western Illinois, recording two rebounds in 16 minutes of action ... Mallory Ladd has registered three steals in each of the last two contests ... Ashley Varner has grabbed at least eight rebounds in every game this season ... Laura Richards enters the weekend with 191 career assists, just six shy of the top-20 all-time at Valpo ... Tabitha Gerardot ranks third in the Horizon League grabbing 3.3 offensive rebounds per game.