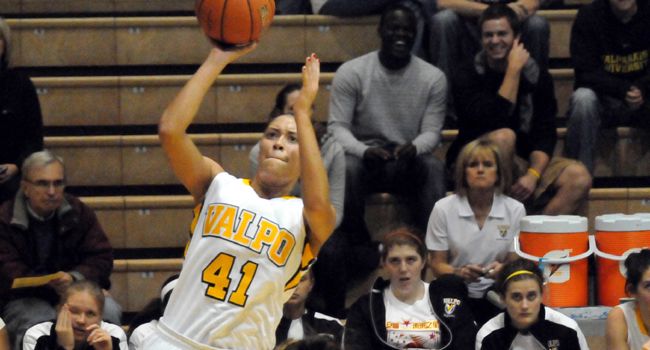 Ashley Varner (South Bend, Ind./Washington H.S.) led Valparaiso with 10 points and seven rebounds on Friday evening, but the Crusaders shot just 25.5% from the floor and fell to Colorado 60-32 in the opening round of the Omni Hotels Classic held at the Coors Events Center in Boulder, Colo.

Both teams started slow offensively, but the Crusaders trailed by just two, 7-5, nearly seven-and-a-half minutes into the contest.  Valpo went 5:30 without scoring though as the Buffaloes built an eight point lead before Varner drained a three-pointer to end the draught.

Shaquira Scott (Wilmette, Ill./Loyola Academy) hit a jumper at the 7:29 mark, pulling Valpo within 19-13.  The Crusaders would not score the rest of the half though.  Chucky Wilson scored the last nine points of the half for Colorado as the Buffaloes ended the stanza on a 16-0 run to take a 35-13 lead into the locker room.

Lexy Kresl scored the first five points of the second half for Colorado to extend the run to 21 straight points before Scott scored on a drive in the lane to end Valpo’s scoreless skid at 10:03 over the two halves.

Varner followed with a basket inside and Gerardot added an old-fashioned three-point play as the Crusaders scored seven straight points.

The Crusaders got the deficit down to 19, 42-23, before Colorado scored the next seven points.  Jessica Carr (Arcadia, Ind./Hamilton Heights H.S.) tallied five straight points for Valpo to make it 49-28 with seven minutes to play, but that was as close as the Brown and Gold would get the rest of the way.

The Buffaloes outrebounded Valpo 40-31 and turned 21 Crusader turnovers into 24 points on the other end.

“In the midst of trials I think there is opportunity,” head coach Keith Freeman said after the game.  “I think we can dig down deep within ourselves and play a complete game.  I’m anxious to watch this team to see how they approach tomorrow.”

Valparaiso (0-4) will return to the hardwood in Boulder on Saturday evening in the consolation game of the Omni Hotels Classic.  The Crusaders will face Montana State from the Big Sky Conference beginning at 6 p.m. CST.

Game Notes: This was the first meeting ever between Valpo and Colorado … Wisconsin defeated Montana State 71-61 in the opening game of the Omni Hotels Classic … the Crusaders scored just eight points in the paint on Friday … Carr scored her first five points as a Crusader … Valpo made a season-high four three-point field goals.