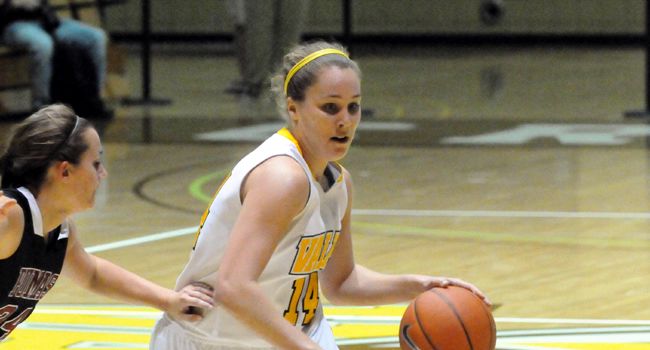 Valparaiso rallied from a pair of double figure deficits on Saturday evening to take the lead, but one final 14-0 run by Montana State proved to be too much to overcome as the Crusaders fell to the Bobcats 71-55 in the consolation game of the Omni Hotels Classic at the Coors Evens Center in Boulder, Colo.

The Crusaders played just seven players in the contest with each one finding the scoring column as well as contributing at least one rebound.

“I saw great improvement in our team from last night in terms of the level of competing,” head coach Keith Freeman said after the game.  “We really battled despite playing without Laura (Richards) tonight.  We started two freshmen in the backcourt and did some things to fall behind early, but to our credit we really battled back.”

Tabitha Gerardot (Fort Wayne, Ind./Canterbury H.S.) registered her first double-double of the season with 13 points and 10 rebounds and was named to the All-Tournament Team while Mallory Ladd (Evansville, Ind./Memorial H.S.) added a career-high 16 points for the Crusaders.  Gina Lange (Wyoming, Minn./Forest Lake H.S.) added seven points and eight rebounds as Valpo’s posts helped the Brown and Gold outrebound the  Bobcats 48-38 for the contest.

“Tabitha Gerardot played the best game I have seen her play in terms of playing within herself,” Freeman added.  “Our three posts really stepped up and played as well as they have all year.”

The Crusaders then fought back for the first time.  Three-pointers by Ashley Timmerman (Pontiac, Ill./Pontiac H.S.) and Ladd started nine straight Valpo points.  Ladd added six more of her own inside, the last of which capped a 15-2 run and gave the Brown and Gold a 19-18 lead at the 9:18 mark.

The Bobcats regained the lead 24-21 before a Gerardot three-point play tied the game.  The game was knotted at 30 with just under two minutes to play when Katie Bussey scored the final 11 points of the half for Montana State, making three triples, and the Bobcats took a 41-32 lead into the break.

Montana State drained seven three-pointers in the first half.

After the Bobcats scored the first basket of the second half, Valpo again battled back.  Lange drained a three-pointer to start the Crusader spurt and Shaquira Scott (Wilmette, Ill./Loyola Academy) continued the momentum with a steal and a score to close within four.  Lange added a 16-footer and Ladd tied the contest at 43 with a 12-foot jumper to cap an 11-0 run.

Valpo’s defense held Montana State without a field goal for eight minutes after that initial field goal, and the Crusaders took the lead with 13:46 to play, 45-44, on a pair of free throws from Ladd.

The lead bounced back and forth for the next six minutes, and was tied for the 10th time at 51 after Timmerman made a pair from the charity stripe.

“We battled back again in the second half,” Freeman added.  “Our Achilles heel was our perimeter shooting.”

From there Valpo went cold from the floor, and the Bobcats reeled off 14 straight points to put the game out of reach, building a 65-51 advantage with just under four minutes to play as the Crusaders went seven minutes without a field goal.

Valpo shot just 19.4% in the second half and finished the game connecting on just 28.6% from the floor.

Ashley Varner (South Bend, Ind./Washington H.S.) pulled down 10 rebounds, one shy of her career high, including three on the offensive end as Valpo pulled down 17 offensive boards on the night.  Jessica Carr (Arcadia, Ind./Hamilton Heights H.S.), stepping in for Richards in the starting lineup, handed out four assists.

“Ashley did a really nice job on the boards.” Freeman concluded.

Valparaiso (0-5) will return home to the Athletics-Recreation Center on Wednesday evening when the Crusaders host Indiana-Northwest. Tip-off is set for 7:05 p.m.

Game Notes: This was the first ever meeting between Valpo and Montana State … Richards missed the game due to illness … Carr had played 35 career minutes entering the game and played 37 on Saturday night … Gerardot’s double-double was the 10th of her career … her 13 points marked a season high ... Scott finished the game with three steals after having two total for her career … Varner also matched a career high with three steals.