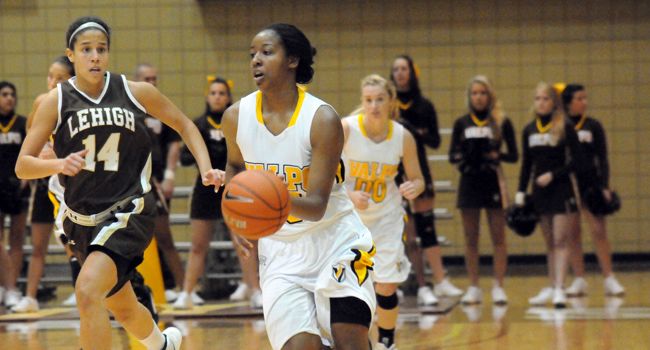 Valparaiso had a chance on its final possession to tie or win on Saturday afternoon at the Athletics-Recreation Center, but the Crusaders could not convert and fell 41-39 to Lehigh.

In a game that was a defensive battle, the two schools combined to shoot just 30% from the floor and forced 44 turnovers.

“It was a grind it out game,” head coach Keith Freeman said afterwards.  “For our team to have a chance today, I felt like we had to play good defense and we did.  Unfortunately we had to lose this game and that’s very tough.  I’m proud of our kids for competing.”

Valpo led by one at the break, and after the Mountain Hawks scored the first basket of the second half, the Crusaders answered and maintained the advantage for the next 13 minutes.  A 6-0 run, keyed by a pair of lay-ins by Gina Lange (Wyoming, Minn./Forest Lake H.S.) sandwiched around a Tabitha Gerardot (Fort Wayne, Ind./Canterbury H.S.) lay-up gave the Brown and Gold its largest lead of the game, 35-29, at the 10:56 mark.

Lehigh answered, and following a steal and a three-pointer by Kelly Peterson, tied the game at 37 with 6:40 to play.

“The difference in the game came down to a couple of our turnovers being converted into threes,” Freeman added.  “That was a really big play.”

Neither team would score for the next three minutes before the Mountain Hawks got a basket as well as a pair of free throws from Emily Gratch and took a four-point lead with 3:18 to go.

Gerardot made two free throws with 2:40 to play, but neither team would score again the rest of the way. Valpo went the final 7:44 without a field goal.

The Mountain Hawks missed a front end of a one-and-one with 15 seconds to play.  Shaquira Scott (Wilmette, Ill./Loyola Academy) missed jumper but Ashley Varner (South Bend, Ind./Washington H.S.) grabbed the offensive board.  She went up with a put-back, but time expired on the Crusaders.

“They did a great job defending us at the end, going zone,” Freeman stated.  “Ashley Varner made a tremendous effort to get to the glass.”

Neither team started the game strong offensively, with Valpo holding a 3-1 advantage through nearly eight minutes of play.  Lehigh built an 11-6 advantage before the Crusaders responded.

Scott drained a triple with 4:37 to play in the half to cap a 12-2 Valpo spurt and give the Crusaders their first lead of the game.  The lead went back and forth before intermission with Varner hitting a jumper just before break to give Valpo a 22-21 advantage at intermission.

Gerardot led the Crusaders with 12 points, while Scott added nine and Varner eight.  Varner also pulled down a team-leading 11 rebounds, including six on the offensive end of the floor.

Gratch led Lehigh (3-6) off of the bench with 10 points while Alexa Williams grabbed 13 boards.  The Mountain Hawks outrebounded Valpo 40-34 on the day.

“I’m proud with our kids in that when we weren’t shooting well it’s easy to get soft on defense,” Freeman added.  “We continued to fight and claw on each possession and that’s a positive.  Our kids have had a lot of adversity over the last 24 hours.  I like how we came together and competed as one today.”

Valparaiso (1-6) will wrap up its three-game homestand at the ARC on Tuesday evening.  Tip-off against IPFW is set for 7:05 p.m.

Game Notes: The all-time series is tied 1-1 … prior to the game Freeman announced that Mallory Ladd (Evansville, Ind./Memorial H.S.) has left the program to return home to Evansville … Valpo shot just 6-of-11 from the free throw line … the Crusaders forced a season-high 27 turnovers by Lehigh … Varner tied her career high with 11 rebounds … Varner also had  a career-best four steals … Lehigh outscored the Crusaders 26-2 off of the bench.