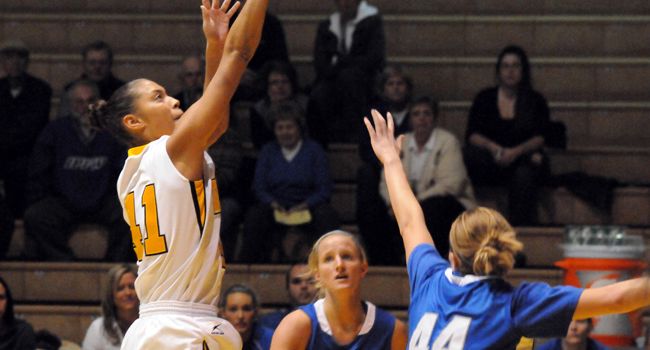 Valparaiso’s defense held IPFW to just 22.8% shooting from the floor for the evening and four players scored in double figures on the offensive end as the Crusaders defeated IPFW 64-43 on Tuesday evening at the Athletics-Recreation Center.

“I’m really proud of our kids,” head coach Keith Freeman said after the game.  “Their grittiness, character, and resilience after the Lehigh game really came through.  I like how hard these kids work and they’ve learned a lot.  I’m happy these kids felt success today.”

The Crusaders jumped out to an 8-1 lead, holding the Mastodons without a field goal for more than four minutes to open the contest, and never trailed on the evening in picking up their second victory of the homestand.

IPFW made just 5-of-27 shots from the floor (18.5%) in the opening half as the Crusaders held the visitors without a field goal for nearly seven minutes midway through the stanza.

Valpo jumped out quickly offensively, making four three-pointers in the game’s first 7:30 to take a 15-6 advantage.

The Mastodons would not cut their deficit under six the rest of the half and Valpo took a 25-15 lead into the locker room.

“The tempo of the game was such that we wanted to stay in a rhythm attacking the pressure,” Freeman said.  “We stayed out of foul trouble and that was a key.  I think their pressure helped us on offense because we were able to move the ball well and had a good balance inside and outside.”

“We were really tough defensively and did a good job carrying out the game plan,” Freeman added.  “Their top three kids are averaging 47 points a game and they only got 28 tonight.  We were able to help off of the other two tonight.”

Valparaiso (2-6) will take to the road for its next two games, beginning Saturday afternoon in Pittsburgh, Pa.  The Crusaders will take on Pittsburgh beginning at 1 p.m. CST.

Game Notes: Valpo leads the all-time series 9-5 and is 6-1 against IPFW at home … the Crusaders have won five of the last six games between the two Hoosier State schools … Varner has now grabbed seven or more rebounds in all eight games this season and has four straight double-figure rebounding games … Gerardot’s double-double was the 12th of her career … Richards played all 40 minutes for the second time this season and six of the boards came on the offensive end … Jessica Carr (Arcadia, Ind./Hamilton Heights H.S.) tied a career high with six assists … Gerardot’s 10 boards tied a season high … Richards made 5-of-7 from the floor … Valpo played just six players in the contest … the Crusaders are allowing just 43 points per game over the last three contests … IPFW entered the game averaging 65.9 points per game and shooting 40% from the floor.