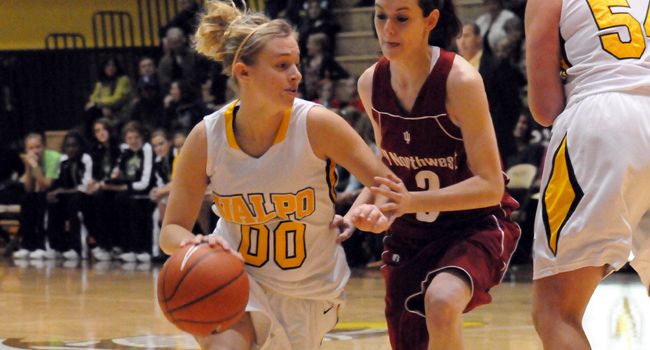 Valparaiso was within two points of Big East foe Pittsburgh with under eight minutes to play on Saturday afternoon before an 8-0 run broke the game open and the Panthers went on to a 65-56 victory over the Crusaders at the Petersen Events Center in Pittsburgh, Pa.

“Our kids really played hard today,” head coach Keith Freeman said.  “We knew it would be a battle and we were in a position late in the game where we had a chance to win.  Considering last year they beat us by 35 points at our place, this was a much different type of game.”

Valpo took its first lead of the game, 7-6, on a Gina Lange (Wyoming, Minn./Forest Lake H.S.) jumper with 12:32 to play in the opening half.  The lead went back-and-forth six times over the next several minutes before a Laura Richards (Connersville, Ind./Connersville H.S.) triple at the 8:14 mark tied the game at 14.

The Crusaders hung close most of the rest of the first half, trailing by just two, 23-21, with under two minutes to play following a Shaquira Scott (Wilmette, Ill./Loyola Academy) lay-in.

Pittsburgh ended the half scoring six straight points though to take a 29-21 lead into the locker room.

Valpo committed 14 first half turnovers and shot just 31% from the floor, but remained within striking distance.

The Crusaders came out of the locker room scoring the first four points to cut the deficit in half as the Panthers missed their first six shots of the stanza while also committing three turnovers.

Tabitha Gerardot (Fort Wayne, Ind./Canterbury H.S.) pulled Valpo within one, 31-30, with just over 14 minutes to play after draining her first three-pointer of the season.

“We did a good job coming out the second half and cutting the deficit pretty quickly,” Freeman added.

After Pitt pushed the lead back to five, the Crusaders again fought back, making four straight free throws to make it a one-point game with 10 minutes to play.

The lead again grew to five but Jessica Carr (Arcadia, Ind./Hamilton Heights H.S.) made a triple as the shot clock expired to make it 42-40 at the eight minute mark.

The Panthers scored on their next possession, and then Abby Dowd connected on a three, her only basket of the game.  After a Crusader miss, Kyra Dunn converted a three-point play in the post following three offensive rebounds and the Pitt lead was at 10 with six minutes to go.

A Carr lay-up with six minutes to play pulled Valpo to within six, but the teams traded baskets and free throws down the stretch as the Panthers held on.

The Crusaders shot nearly 46% from the field in the second half to finish at 37.7% for the game and cut down on their turnovers, committing just seven after halftime, including just one over the final 15 minutes.

“We shot the ball better in the second half,” Freeman said.  “The kids playing on the floor were really trying hard.  The margin for error against a team like this is just so small.”

Marquel Davis led Pittsburgh (5-5) with 17 points while Dunn added 11 points and 10 rebounds.  The Panthers outrebounded Valpo 43-35, including 19-12 on the offensive end.

“Our first line of defense was pretty good today,” Freeman concluded.  “Our ability to keep them off of the boards was tough because of their strength and size.”

Valparaiso (2-7) will have eight days off before returning to the court next Sunday, Dec. 18, against Ball State.  Tip-off is slated for 12 p.m. CST in Muncie, Ind.

Game Notes: Pittsburgh has won all three meetings between the two schools … Valpo has never defeated a Big East opponent … Varner has now grabbed seven or more rebounds in all nine games this season … Carr’s previous career high was seven points against Indiana-Northwest … Gerardot led the Crusaders in scoring for the third time this season … both teams were just 11-of-19 from the free throw line.