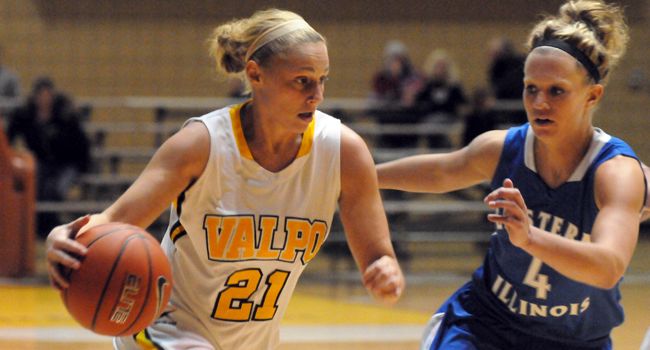 Christmas came early for Valparaiso on Tuesday evening as Ashley Timmerman’s (Pontiac, Ill./Pontiac H.S.) three-pointer with 29.8 seconds to play broke a tie and pushed the Crusaders past Eastern Illinois 53-50 at the Athletics-Recreation Center in the team’s final game before the holiday.

“I’m really proud of these kids,” head coach Keith Freeman said afterwards.  “One of the biggest definitions of success is grit and character and we showed it again today.  We had kids making effort after effort all game.  We played smart, stayed out of foul trouble, and kept moving our feet even when we were tired.”

Timmerman delivered the game-winning triple as the shot clock was beginning to wind down from the top of the arc.  Just 34 seconds earlier the senior guard hit a pull up jumper from the right elbow to tie the game at 50.

“She’s a smart player,” Freeman said of Timmerman.  “Her ability to shoot it really helped us at the end, and she got open for that big shot.  She’s had limited practice all year.  That’s the longest (29 minutes) she’s been on the floor, playing or practicing all year because of her shin injury.  She really stepped up.”

Laura Richards (Connersville, Ind./Connersville H.S.) came up with her fifth steal of the game on the Panthers’ next possession, but Valpo’s defense had to force two more missed shots by Eastern Illinois in the final 11 second after missing a pair of front ends of one and ones.  When Jordyne Crunk’s triple try was off the mark just before the buzzer, the Crusaders had their third victory in their last four games.

The Crusaders started the game hot from the floor, making seven of their first eight shots and nine of their first 12 to build a 22-17 lead with nine minutes to play before intermission.

After the Panthers cut the lead to one, Valpo went on a 10-1 run, holding the visitors without a field goal for six minutes while forging a 32-22 advantage.  Eastern Illinois scored the final four points of the stanza though and the Crusader lead was six at the break.

Valpo scored the first four points of the second half to push the lead back to 10, and still had a seven point lead with 11 minutes to go when the Panthers made a run.  Kayla Payne’s triple at the 8:01 mark pulled the Panthers within one.  The Crusaders made just one field goal over a seven-and-a-half minute span, and when Chantelle Pressley hit a jumper with 2:26 to go, the Panthers had a 50-46 lead, capping a 16-5 run.

Ashley Varner (South Bend, Ind./Adams H.S.) answered Pressley’s basket with a jumper in the paint and added a steal on Eastern Illinois’ next possession, setting up Timmerman’s tying jumper.

“Varner has such a passion for playing,” Freeman added.  “She’s everything you want in a student-athlete.  We were able to put her in isolation situations and that’s how she scored a majority of her points.”

The Crusaders, who dressed just six players for the contest, each of whom saw at least 22 minutes of action, shot a season-high 50% from the field, including 6-of-13 (46.2%) from three-point range.

“There’s no room for error when you have six,” Freeman said.  “Everyone has to come to play every night.  We’re quite a bit different of a team in the last two to three weeks.  We really have some tough kids.”

Varner registered her second straight double-double, and third of the season.  She scored a season-high 19 points and tied a career high with 12 rebounds.  Tabitha Gerardot (Fort Wayne, Ind./Canterbury H.S.) added 12 points while Timmerman finished with nine.  Richards handed out seven assists, pulled down six rebounds, and registered the five steals while not leaving the court for the 40 minutes.

Eastern Illinois (7-3), which entered the game ranked 23rd in the latest Mid-Major poll, shot 36.7% from the floor, including just 4-of-18 (22.2%) from three-point range.  The Panthers, which were averaging 77.1 points per game entering the contest, outrebounded Valpo 36-30, including 16-4 on the offensive end, but managed just five second chance points in the contest.

“The bottom line is we defended very, very well,” Freeman concluded.  “We’re playing smart and as a team.  This is the best defensive team we have had in about eight years.  They didn’t hurt us in the transition game like they have against a lot of other teams.  That’s a big part of their offense.”

Valparaiso (4-7) will have eight days off before returning to the hardwood on Wednesday, Dec. 28, to open Horizon League play at Wright State.  Tip-off is set for 6 p.m. CST in Dayton, Ohio.

Game Notes: Valpo leads the all-time series 8-4 and has won four straight meetings between the two schools … Gerardot has scored in double figures in seven straight games … Varner has had double figure rebounding efforts in six of her last seven contests … five of Valpo’s last six opponents have scored 53 points or fewer … the Crusaders committed just nine fouls in the game … Richards six rebounds were a season high and her five steals tied a career high … Richards played all 40 minutes for the third time this year and has played 37 or more in each of the last five contests.