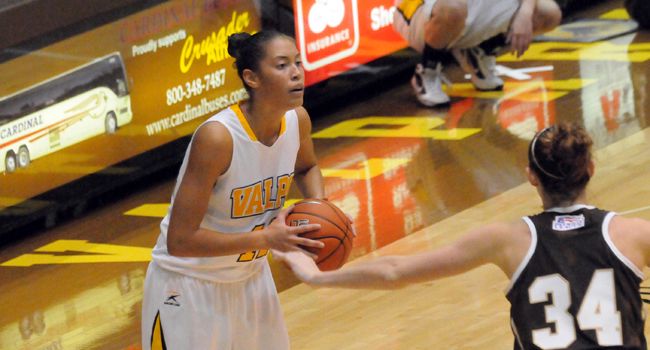 Ashley Varner (South Bend, Ind./Washington H.S.) and Tabitha Gerardot (Fort Wayne, Ind./Canterbury H.S.) both registered double-doubles for Valparaiso but the Crusaders could not overcome 62.5% shooting in the first half by Detroit and fell 68-52 at Calihan Hall in Detroit, Mich.

Varner finished with 16 points and 10 rebounds, eight of which came on the offensive end, while Gerardot had 15 points and 10 boards.

The Crusaders fell behind quickly as the Titans scored nine of the game’s first 11 points in just over two minutes before a Varner three-pointer stopped the run and brought Valpo within four.

Detroit added another 11-2 spurt to build a 20-7 advantage eight minutes into the contest, making seven of their first nine shots from the floor.

“Detroit has a great low post presence,” head coach Keith Freeman said.  “We had to double in the low post to stop them, and by doing that it opened up their three-point shooters.”

The Titan lead grew to 18 just before intermission, but Laura Richards (Connersville, Ind./Connersville H.S.) scored inside, stole the ball, and added another layup, all in the final three seconds of the half to bring Valpo within 40-26 at the break.

“We were sluggish moving the ball and cutting,” Freeman said.  “We got in a bad situation in the first half where Varner got two fouls early and so did (Gina) Lange.  We turned the ball over way too much and took some bad shots which led to fast break points.”

Gerardot kept the Crusaders in the game offensively, scoring 11 points in the opening stanza.  Detroit’s Megan Hatter scored 12 to pace all scorers at halftime as the Titans shot 62.5% from the floor in the opening 20 minutes while adding 7-of-8 from the free throw line.

Varner tried to lead a Valpo comeback early in the second half, scoring the team’s first seven points, but the Titans hit a pair of threes to keep the Detroit lead at 13.

“We did tighten up and play much better defense the second half,” added Freeman.

The hosts made four of their first five threes in the second half as part of a 15-4 run, increasing the lead to 63-39.  Valpo was never able to get closer than 16 the rest of the way.

Jessica Carr (Arcadia, Ind./Hamilton Heights H.S.) added 11 points for the Crusaders off  of  the bench while Richards registered four steals defensively.  Valpo shot 34.5% from the floor for the game but made just 5-of-21 from three-point range.

Valparaiso (4-9, 0-2) will return home to the Athletics-Recreation Center on Thursday evening as the Crusaders host Cleveland State.  Tip-off in the opening game of a three-game homestand is set for 7:05 p.m.