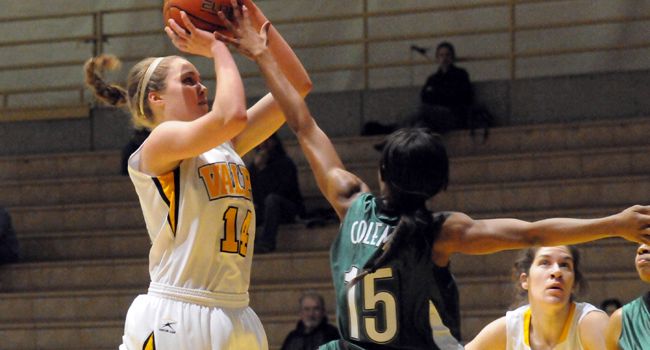 Valparaiso played solid defense yet again on Thursday evening but was unable to overcome a cold shooting night from the floor and fell to Cleveland State 49-45 at the Athletics-Recreation Center.

The Crusader defense held its fifth opponent of the season to 50 points or fewer, but offensively made just 2-of-20 three-point attempts while shooting 32.2% from the field overall.

“It’s a frustrating game,” head coach Keith Freeman said afterwards.  “I thought we had a lot of decent looks and most of our threes were open.  I’m proud of our kids from the standpoint that when the ball was not going in the basket they continued to play hard on defense.”

Early on the Crusaders were able to build a five-point advantage, 12-7, less than eight minutes into the contest.  Cleveland State took the lead for good though with an 11-0 run, holding the Brown and Gold scoreless for nearly five minutes.

Valpo fought back, cutting the deficit to one, 19-18, on an Ashley Varner (South Bend, Ind./Washington H.S.) lay-in before trailing 24-20 at intermission as neither side could score in the final 3:30 of the first half.

The Crusaders again pulled within one, 26-25, on an Ashley Timmerman (Pontiac, Ill./Pontiac H.S.) triple that was banked in from the right wing but could not get any closer.  By the 13:35 mark of the second half the Vikings had pushed the lead back to seven.

Five straight points by the Crusaders, the final three by Varner, cut the deficit to two, 37-35 at the 8:23 mark and Valpo again pulled within two, 45-43, with 2:48 to go, but could never tie the game or take the lead down the stretch.

Tabitha Gerardot (Fort Wayne, Ind./Canterbury H.S.) was the only one who seemed to be able to connect for the Crusaders, making 8-of-11 from the floor to finish with 16 points.  She also pulled down seven rebounds.

“Obviously we would have liked to have gotten her more touches,” Freeman said.

“The difference in the game was that we didn’t make shots,” Freeman concluded.  “We needed to convert and have to be able to make shots at a higher percentage.”

Valparaiso (4-10, 0-3) will look to rebound on Saturday afternoon when the Crusaders welcome Youngstown State to the ARC.  Tip-off is slated for 1:35 p.m.

Game Notes: Valpo leads the all-time series 12-9 but the Vikings hold a 6-5 advantage at the ARC … Varner’s double-double was the sixth of her career and fifth this season … Laura Richards (Connersville, Ind./Connersville H.S.) had four assists in the game and now has 229 for her career, moving her past Lina Mascarenas (1988-1992) into 14th place all-time at Valpo … Varner and Gerardot both reached the 500-point plateau for their careers with 506 and 501 respectively.