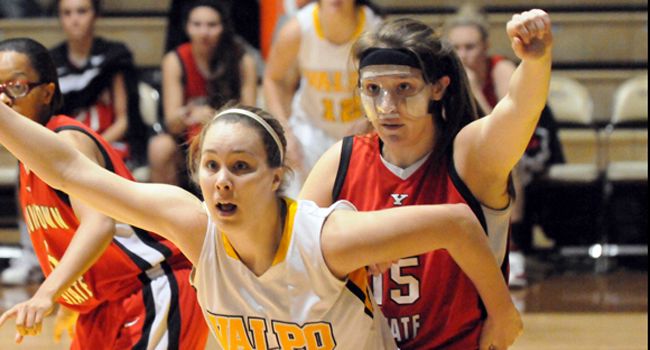 Valparaiso took a three-point lead into the final eight minutes of the game but a 10-1 run by Youngstown State gave the Penguins the lead for good and they hung on to defeat the Crusaders 55-48 on Saturday afternoon at the Athletics-Recreation Center.

“Our kids kept battling,” head coach Keith Freeman said afterwards.  “The level of respect I have four our kids and how hard they play is so high.  We just don’t shoot the ball well enough.  We need to be able to knock down shots.  Fatigue will make you struggle from the arc.”

Valpo, which dressed just six players, saw all five starters play at least 38 minutes in the game.  The Crusaders went nearly eight minutes down the stretch without a field goal, staying close with free throws.  Valpo shot just 30% from the floor on the night and went 0-for-13 from three-point range.

Neither squad shot the ball well in the opening half as Valpo started just 3-of-24 from the floor while the Penguins were 6-of-22 while committing 10 turnovers over the game’s opening 16 minutes.  Trailing by one late in the half, Tabitha Gerardot (Fort Wayne, Ind./Canterbury H.S.) put Valpo on top with a pair of layups and Gina Lange (Wyoming, Minn./Forest Lake H.S.) also scored inside as a late 6-0 run gave the Crusaders a 20-17 advantage at the break.

Youngstown State scored eight of the first 10 points of the second half to take a 25-22 lead and still held the lead until Ashley Varner’s (South Bend, Ind./Washington H.S.) putback at the 13:12 mark tied the contest.  That started a 10-0 Valpo run that saw the Brown and Gold build a 36-28 advantage with 10:34 to go.

The Penguins answered with seven straight points to close within one.  Kenya Middlebrooks three-pointer tied the game at 40 and Brandi Brown eventually gave Youngstown State the lead for good with her jumper at the 7:22 mark.  Middlebrooks fourth triple of the game extended the lead to six and Valpo could manage only free throws down the stretch until a lay-in in the game’s final minute.

“They did a nice job with their motion,” Freeman added.  “Give them credit.  They are hard to guard with so much movement.  We had some grind it out possessions defensively.”

The Crusaders drew within two, 47-45 at the 3:46 mark but the Penguins capped a perfect day at the free throw line making six in the final 1:09.

Gerardot led the Crusaders with a game-high 19 points while Lange added 13 for the Brown and Gold.  Varner pulled down a career-high 15 boards while Laura Richards (Connersville, Ind./Connersville H.S.) matched her career-best with six steals as Valpo forced 19 turnovers.

“I was really impressed with the way our kids stepped up and defended,” Freeman concluded.  “Our man-to-man was very good.”

Valparaiso (4-11, 0-3) will have a week off before concluding its three-game homestand next Saturday afternoon hosting Butler at the ARC. Tip-off is set for 1:35 p.m.

Game Notes: Youngstown State leads the all-time series 17-13 and have won three straight meetings … Valpo is 2-of-33 from three-point range over the last two games … Varner passed Sarah Schmoyer to move into 17th all-time at Valpo with 461 career boards … Varner’s previous career high on the glass was 12 twice earlier this season.