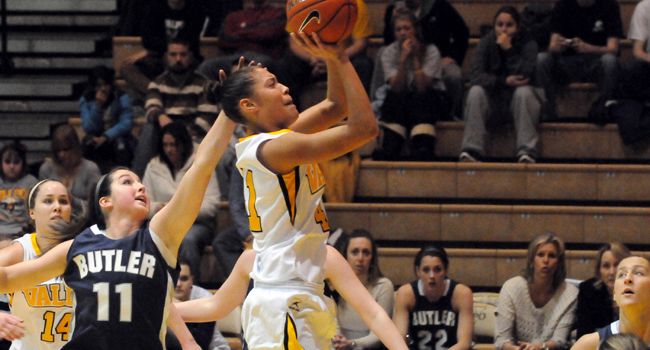 Valparaiso made a season-high eight three-pointers and the defense came up with key stops down the stretch as the Crusaders defeated Butler 58-53 on Saturday afternoon at the Athletics-Recreation Center for the Brown and Gold’s first victory of the season in Horizon League play.

“This was a combination of a lot of kids busting their butt for great periods of time,” head coach Keith Freeman said afterwards.  “We’ve done that in nearly every game but one this year.  Making shots is another story though, and today we did that.  With our defense if we shoot 40% we’re going to have a good chance to win.”

Valpo shot 40.4% from the floor in the victory, including a blistering 57.1% over the final 20 minutes.  The Crusaders also connected on 8-of-20 (40%) from three-point range after making just 2-of-33 from beyond the arc in their previous two games combined.

The Crusaders trailed by seven, 42-35, with 11:10 to play before battling back.  Six straight points cut the deficit to one and Tabitha Gerardot (Fort Wayne, Ind./Canterbury H.S.) tied the game at 45 with a free throw at the 4:48 mark.  After a defensive stop, Gina Lange (Wyoming, Minn./Forest Lake H.S.) connected on a triple try to give Valpo the lead, one the team would not relinquish the rest of the way.

Lange would hit two free throws to increase the advantage to five with two minutes to play, but Sarah Hamm scored a three-point play in the paint to cut the lead to two.  On Valpo’s next possession, Ashley Varner (South Bend, Ind./Washington H.S.) drilled a three from the right side as the shot clock expired to push the lead to five with 1:27 to go.

“Gina and Varner both hit big threes for us in that second half,” Freeman added.  “We’ve got a core of really, really tough kids that just kept battling.”

The Crusaders forced a miss on the other end and Laura Richards (Connersville, Ind./Connersville H.S.) grabbed the rebound and was fouled.  After she made two the lead was seven with 58.6 second to play.

Cobb scored down low and after a Valpo turnover, Mandy McDivitt made her sixth three-pointer of the game for Butler to cut the Crusader advantage to two with 16.0 seconds to go.  Richards was fouled with 8.2 seconds left and made the first free throw.  She missed the second, but grabbed her own rebound, her career-high 11th of the game, and was fouled again.  She made the final two to finish the game 7-of-8 from the stripe and secure the win for Valpo.

The Crusaders jumped out to a quick 7-2 advantage and still led by four with eight minutes remaining in the first half before Butler scored eight straight points to take the lead 19-15.  Valpo battled back though and the two sides went into the locker room tied at 21.

The Brown and Gold scored the first five points of the second half before Butler went on a 14-2 run over six minutes to build a seven-point advantage, only to see Valpo rally.

Varner led the Crusaders with 13 points and just missed a double-double with nine rebounds as the Crusaders finished the game outboarding the Bulldogs 34-29.  Gerardot and Ashley Timmerman (Pontiac, Ill./Pontiac H.S.) both added 12 points, Timmerman’s all coming from long range.  Lange and Richards both finished with nine points.  Richards added eight assists and four steals in 39 minutes in addition to her career-high 11 boards.

“Laura was very, very active defensively, especially the last 12 minutes,” Freeman said.  “She got her hands on a lot of loose balls.”

Valparaiso (5-11, 1-4) will take to the road next week for a pair of games in Chicago beginning on Thursday evening when the Crusaders travel to Loyola.  Tip-off is set for 4:30 p.m.

Game Notes: Butler leads the all-time series 20-6 and had won six of the previous seven meetings between the two schools … Valpo is 5-1 this season when shooting better than 40% from the floor … Varner’s nine rebounds mover her by Robyn Lippert (1987-1991) for 16th all-time at Valpo on the career charts with 470 … Richards passed Jeanette Gray (1999-2003) for 13th on the career assist list with 251 … Gerardot matched a career high with three assists … Richards’s eight assists matched a career high and her 11 rebounds bettered her previous career best of nine … Timmerman’s 12 points marked a season best … this was Valpo’s first victory on a Saturday all season in seven tries.