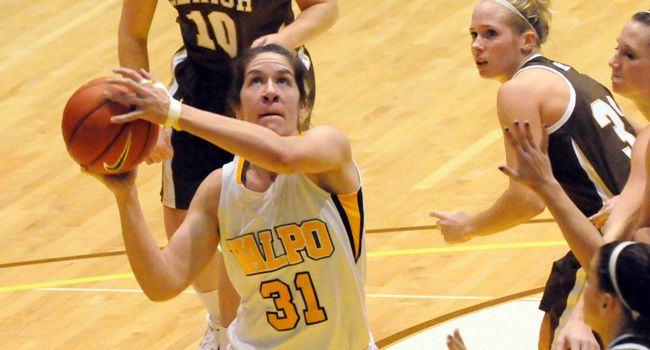 Gina Lange (Wyoming, Minn./Forest Lake H.S.) scored a career-high 17 points for Valparaiso on Thursday evening at the Gentile Arena, but Loyola (Chicago) went on a 32-5 run late in the second half and defeated the Crusaders 86-56 in Chicago, Ill.

Lange scored 13 of her 17 points in the first half to keep Valpo close, and the Crusaders were within three with 13 minutes to play but then went eight minutes without a field goal as the Ramblers pulled away.

The Crusaders jumped on top early, 10-7, thanks to five points from Lange.  Loyola took the lead for good with a 15-3 spurt to take a 22-13 advantage.  The Ramblers caught fire during the run, making 10-of-14 shots over an eight minute stretch.

Valpo clawed back, cutting the deficit to two, 30-28, on a lay-in by Lange with 3:11 left before halftime, but the Ramblers scored eight of the 11 points in the stanza to build a 38-31 advantage at the break.

An Ashley Timmerman (Pontiac, Ill./Pontiac H.S.) three-pointer, followed by a layup underneath on a feed from Laura Richards (Connersville, Ind./Connersville H.S.) capped a 7-0 Valpo run to tie the game at 40 with 17:25 to play.

The Crusaders were unable to take the lead though and Loyola answered with eight straight points to retake an eight point advantage.  Ashley Varner (South Bend, Ind./Washington H.S.) made a triple to cut the Rambler lead to 48-45 with just under 13 minutes to play before the Crusaders went cold from the floor.

Back-to-back triples from Abby Skube made it 63-47 Loyola as part of a 22-3 run as the Crusaders went eight minutes without scoring from the floor.  By the time the 32-5 run ended the Ramblers had built an 80-50 advantage and put the game out of reach.

“Skube had a great game,” Freeman said.  “We didn’t have an answer guarding her or Law in the low post.  They are a tough team to guard because they shoot nearly 40% from three-point range, making it hard to double in the post.”

Loyola finished the night shooting 53.8% from the floor and committed just six turnovers.  Valpo shot 36.2% for the game, including just 27.6% after the break.

“It seemed like tonight we had some kids struggling to move from the get go,” Freeman added.  “We have put together 15 games of great effort prior to tonight so I expect us to bounce back Saturday and be ready to go.”

Valparaiso (5-12, 1-5) will conclude its two-game road swing with another game in Chicago on Saturday evening.  The Crusaders will face UIC with tip-off slated for 7 p.m. at the UIC Pavilion.

Game Notes: Valpo leads the all-time series 17-3 … Valpo did not commit a single foul in the first half … Richards handed out six assists and is now within one of 12th place on Valpo’s career list with 246 in three seasons … Ieva Jansone (Riga, Latvia/Agenskaina Gymnasium H.S.) scored a career-high four points … all seven Crusaders that dressed scored.