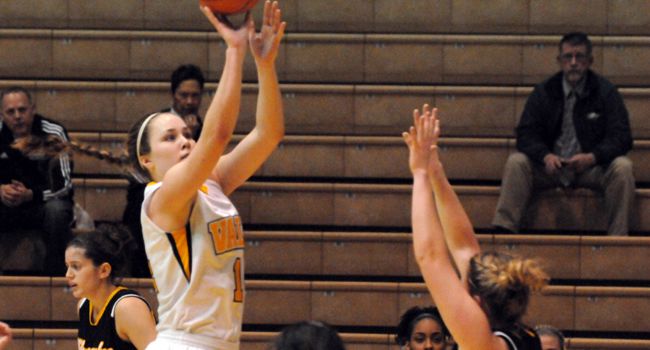 Gerardot led all scorers with 16 points while Lange added 15 points.  Combined they shot 10-of-14 from the floor.  Unfortunately for the Crusaders, the rest of the team managed to connect on just 6-of-30 in the loss.

“I’d have liked to be able to get Tab more looks inside,” head coach Keith Freeman said after the game.  “She passed up a couple of opportunities and they did a great job of pressuring Laura, disrupting the offense.”

Trailing by just two, 20-18, at the 8:46 mark of the first half following an Ashley Timmerman (Pontiac, Ill./Pontiac H.S.) three-pointer, the Crusaders made just one field goal the rest of the half and fell behind 29-22 at the break.

“It’s hard to sustain the defense when the offense doesn’t flow,” Freeman said.  “We were constantly trying to get stops.”

Valpo made a run as Gerardot and Lange both scored inside before a Laura Richards (Connersville, Ind./Connersville H.S.) driving layup cut the deficit to just four, 37-33.

After the Panthers pushed the lead back to eight, Lange drained a triple to make it 43-38 with 6:21 to play.  Neither team would score for the next two minutes before Angela Rodriguez picked up a loose ball and connected from three.

Milwaukee forced a Crusader turnover and Kiki Wilson also made a triple and the lead was 11 at the four minute mark.  Valpo could not get the deficit under six the rest of the way.

Timmerman tallied eight points and Richards scored seven for the Crusaders on the night.  Valpo shot 36.4% from the floor and made 7-of-16 (43.8%) three-pointers, but committed 21 turnovers.

“We didn’t handle the ball like we wanted to,” Freeman added.  “Turnovers were our Achilles’ Heal.  We need to make passes when they are there.  We were outscored off of turnovers 22-7 and that was the difference in the game.”

Milwaukee finished the game at 37.7% from the field with just 14 miscues.

Game Notes: Milwaukee leads the all-time series 13-5 and has won four straight meetings between the two schools … Ashley Varner (South Bend, Ind./Washington H.S.) grabbed a game-high eight rebounds and now has 495 for her career, matching Denise Dunbar (1982-1986) for 15th all-time at Valpo … Lange made a career high three three-pointers on the evening.