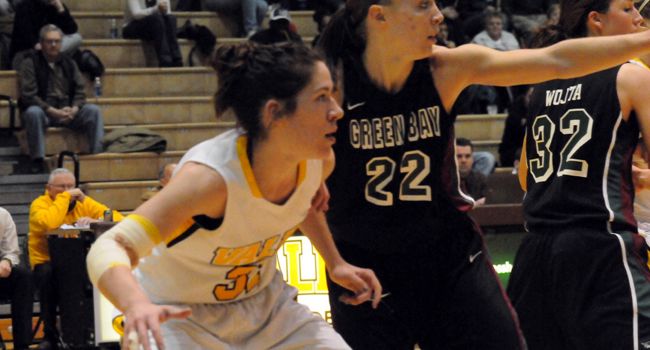 Valparaiso wrapped up the first half of Horizon League play on Saturday afternoon, dropping a 65-37 game to #12/9 Green Bay at the Athletics-Recreation Center.

“Gina certainly stepped up her offensive production today,” head coach Keith Freeman said after the game.  “You have to be in great physical condition to compete with Green Bay and Gina is one of our top kids in terms of conditioning.”

Green Bay scored seven of the game’s first nine points before back-to-back jumpers by Ashley Varner (South Bend, Ind./Washington H.S.) and Ashley Timmerman (Pontiac, Ill./Pontiac H.S.) pulled the Crusaders within 9-6.  That would be as close as Valpo would get though as the Phoenix went on an 18-2 run over five minutes to take a 19-point advantage.

“We did a good job all game long defending them in the half court,” Freeman added.  The difference was the points off of turnovers and their second chances.”

The margin stayed between 22 and 30 throughout the second half as Green Bay (19-0, 9-0 Horizon) remained one of the two unbeaten teams remaining in the country.

Julie Wojta led the Phoenix with 19 points and 10 rebounds while Lydia Bauer added 11 points and Adrian Ritchie chipped in 10 more.

“Green Bay is very well coached and fundamental,” said Freeman.  “Their top seven are very difficult to play against.”

“We did a pretty good job affecting their shooting percentage from the floor,” commented Freeman.

Varner added nine points for the Crusaders in addition to Lange’s 18-point effort, and grabbed five rebounds to give her 500 for her career.

Valpo shot 35.9% from the floor and finished the game with 26 turnovers.  The Crusaders did outrebound the Phoenix 36-35 but took 23 fewer shots than the visitors.

“They are forcing 27 turnovers per game and they got their average again today,” Freeman said.  “They are as good as anyone you can play in terms of pressuring the basketball and not letting you run offense.  This wraps up the first half of league play and we now have to establish goals for the second round.   We need to get to 60 points in a game and need to improve our offensive efficiency.”

Valparaiso (5-15, 1-8) will open a three-game road trip on Thursday evening against Youngstown State.  Tip-off is set for 6:05 p.m. CST at the Beeghly Center in Youngstown, Ohio.

Game Notes: Green Bay leads the all-time series 23-4 and has won eight straight meetings between the two schools … with 500 rebounds, Varner is now tied with Katie Boone (2001-2005) for 14th all-time at Valpo … Lange finished the game 7-of-11 from the floor and has scored 15 or more points in three of her last four games … the 65 points scored by the Phoenix tied the second fewest all season … Laura Richards (Connersville, Ind./Connersville H.S.) handed out two assists and now has 250 for her career … Valpo did not make a three-pointer on the afternoon.