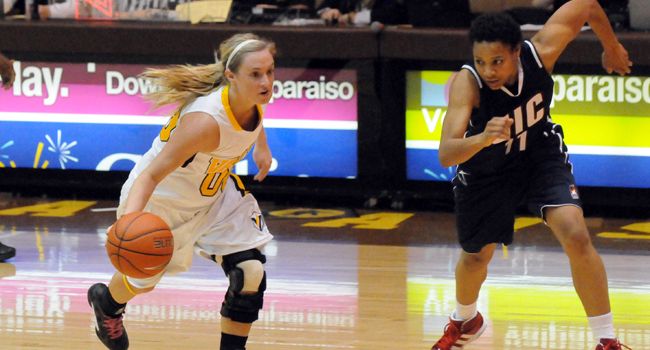 Valparaiso saw its two-game winning streak come to an end on Thursday evening as the Crusaders fell to UIC 54-43 at the Athletics-Recreation Center.

The Crusaders made five of their first six shots from the floor but committed 10 turnovers in the game’s first nine minutes and trailed 12-11.

“We weren’t very good offensively to begin the game in terms of executing,” head coach Keith Freeman said.  “We turned the ball over way too much.  We were standing around on offense and allowed them to continue to pressure us.”

Valpo cut into the Flames’ advantage early in the second half.  A three-pointer by Ashley Varner (South Bend, Ind./Washington H.S.) followed by a jumper from Tabitha Gerardot (Fort Wayne, Ind./Canterbury H.S.) pulled the Crusaders within eight, 45-37, at the 12:25 mark.

The Crusaders had three chances to cut the deficit further, but were unable to and UIC scored the next seven points to take the lead back to 15 with 6:15 to play.  Valpo went more than seven minutes without scoring during the stretch.

“UIC is a tough team for us to play with their athleticism and quickness to the basketball,” Freeman said.

After the deficit was back down to 11, the final margin, neither team was able to score in the game’s final 3:08.

“We had a hard time controlling Green’s penetration all game,” Freeman added.  “Laura did a good job on Bailey containing her under her average.”

The Crusaders finished the game shooting 39.5% from the floor after shooting 50% in the first half and committed 21 turnovers which led to 23 UIC points.  The Flames also outscored Valpo 16-0 in fast break points and outrebounded the Crusaders 38-27 including 18-7 on the offensive end.

“I fully expect us to come back Saturday ready to play with renewed energy,” Freeman concluded.

Valparaiso (7-17, 3-10) will return to action on Saturday afternoon hosting Loyola (Chicago).  Tip-off at the ARC is set for 1:35 p.m.  The game is a Play 4 Kay game in which the Crusaders to benefit breast cancer awareness.

Game Notes: Valpo leads the all-time series 19-17 but UIC has won four straight … the 54-43 final was identical to the first meeting this season in Chicago on Jan. 21 … Richards had four assists to pass Lisa Winter (1998-2000) for ninth on the Crusaders’ all-time list … there were just 17 combined fouls called in the game.