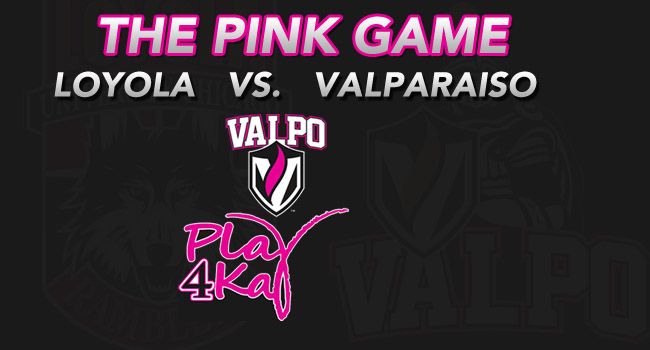 Upcoming in Crusader Basketball: Valparaiso looks to bounce back from Thursday night’s setback on Saturday afternoon as the Crusaders host Loyola (Chicago) at the Athletics-Recreation Center.  Saturday’s contest is a Play 4 Kay game in support of breast cancer awareness and cancer survivors will be honored prior to tip-off.

Head Coach Keith Freeman: In his 18th season on the Valparaiso bench, Keith Freeman has a 283-243 (.539) record at the helm of the Brown and Gold.  In his 23rd season overall, Freeman has a 412-290 (.587) career mark.  He is Valpo’s all-time winningest coach and has amassed more than half of the victories in the program’s history.

Series Notes: Valparaiso and Loyola are meeting for the 21st time in a series that dates back to Feb. 22, 1994.  The Crusaders lead the overall series 17-3 but the Ramblers won the first meeting between the two schools this season 86-56 in Chicago on Jan. 19.  Valpo swept last year’s series between the two schools, including a 72-68 win at the ARC.  The Crusaders are a perfect 9-0 all-time against the Ramblers at the Athletics-Recreation Center.

Wrapping Up UIC: Valparaiso committed 21 turnovers, including 15 in the first half, which led to 23 Flame points as UIC defeated the Crusaders 54-43 on Thursday evening at the Athletics-Recreation Center.  Valpo shot 50% from the floor in the first half but connected on just 32% after the break.  Tabitha Gerardot led the Crusaders with nine points while Jessica Carr and Gina Lange each added eight points.  Shamiea Green led all scorers with 20 points for UIC while Jasmine Bailey added 11 points and 13 rebounds.  The Flames outrebounded Valpo 38-27 for the game, including 18-7 on the offensive glass.

Scouting Loyola: The Ramblers are looking to bounce back from a 72-46 loss on Thursday evening at Butler and have dropped five of their last seven games overall.  Simone Law leads four Ramblers averaging in double figures with 14.0 points per game while Patrice King adds 11.5 points per night.  Troy Hambric and Monica Albano are adding 10.7 and 10.2 points per game respectively.  Law leads the team in rebounding grabbing 7.2 boards per contest.  As a team Loyola is shooting 41.8% from the floor and 72.5% from the free throw line.  The Ramblers are also the league’s top three-point shooting team at 38.4% and lead the conference averaging 5.2 blocks per game.

Playing 4 Kay: Valparaiso will take part in the WBCA’s Play 4 Kay event on Saturday afternoon.  Play 4 Kay is an opportunity for a nation of coaches to raise breast cancer awareness and funds for research on the court, across campuses, in communities and beyond. The official charity is the Kay Yow Cancer Fund in partnership with The V Foundation and Women’s Basketball Coaches Association (WBCA). Women cancer survivors will be honored prior to the game and proceeds from ticket sales will go to the local chapter of the American Cancer Society. Fans are asked to wear pink and “get in the spirit” of the day.

Super Women: Tabitha Gerardot played all 40 minutes for the first time in her Crusader career on Thursday night while Gina Lange and Laura Richards both failed to leave the floor as well.  Richards has gone the distance eight times this season, and has played all 160 minutes over the last four games.  The complete game effort was Lange’s fifth of the season.  Jessica Carr also has one complete game under her belt, playing all 40 minutes earlier this year against Youngstown State.

Getting Defensive: Valparaiso ranks among the Horizon League leaders in most defensive categories.  The Crusaders are second in the conference, and 81st nationally, allowing just 57.8 points per game.  Valpo also ranks third in the league in field goal percentage defense (37.6%) as well as second in three-point field goal percentage defense (29.8%).

Showing Second Half Improvement: With two victories in the first four games of the second half of Horizon League play, the Crusaders have already improved over the first half in terms of win output.  In fact, in every year since Valpo joined the Horizon League, the Brown and Gold has tallied as many, if not more, conference wins during the second half of league play as the first.

Varner on the Rebounding List: Ashley Varner has continued to climb the Crusaders’ all-time rebounding charts this season, passing Katie Boone (2001-2005) for 14th on the career list.  The fifth-year senior’s 530 career boards are seven boards behind Jill Otto (1985-1989) for 13th on the career charts.

What Foul?: With such a short bench, fouls have become a premium this season for the Crusaders.  Valpo has done a good job of staying out of foul trouble all season, committing just 13.2 fouls per game this season, 12th fewest among all NCAA Division I schools.  In fact, the Crusaders went the entire first half without an infraction on Jan. 19 at Loyola (Chicago).

Varner Earns Academic Honor: Ashley Varner was named as the Horizon League’s Scholar-Athlete of the Month for December.  The fifth-year senior averaged 13.7 points and 9.7 rebounds per game in seven contests during the month, posting four double-doubles.  In the classroom she is enrolled in graduate school working on her master’s degree in clinical mental health counseling after already earning a bachelor’s degree in psychology.

Dialing Long Range: The Crusaders connected on 7-of-11 three-pointers against Butler on Feb. 11, connecting on 63.6% from long range.  The long range shooting ties for the eighth best single game percentage from beyond the arc in school history.

Getting to the Free Throw Line: Ashley Varner made 13-of-18 free throws against Cleveland State on Feb. 4. Her 13 free throws made tie her for fifth on Valpo’s single game list while her 18 attempts mark the third most by any Crusader in a game in school history.

This and That: Valpo and UIC played to the same 54-43 score in both meetings this season ... Tabitha Gerardot has scored seven or more points in every game but one this year ... the Crusaders and Flames combined for just 17 total fouls on Thursday night.