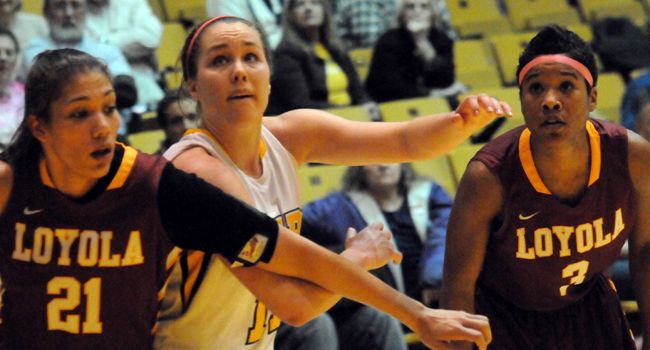 Valparaiso made 12 of its first 16 shots from the floor on Saturday afternoon to build an early lead that the Crusaders would never relinquish on their way to a 69-46 victory over Loyola (Chicago) at the Athletics-Recreation Center.

Tabitha Gerardot (Fort Wayne, Ind./Canterbury H.S.) scored a game-high 20 points, making 9-of-10 shots from the floor while playing all 40 minutes.  Ashley Varner (South Bend, Ind./Washington H.S.) added a double-double with 19 points and 10 boards.  The fifth-year senior was 9-of-15 from the field as Valpo shot 52.9% for the afternoon.

“Tabitha has become a much more efficient player,” head coach Keith Freeman said after the game.  “Ashley Varner played with a lot of energy and we need that.  She was very effective today driving to the basket and crashing the boards.”

Trailing 4-3, Varner’s three-pointer gave Valpo the lead for good and jump-started a 13-0 Crusader run that would see the Brown and Gold’s lead remain in double figures for the rest of the contest.  She scored seven quick points during the run while Gerardot added four more as the duo accounted for 14 of Valpo’s first 16 points in the game.

“I liked our ball movement, especially early as we built the lead,” Freeman said.  “We had lots of assists and few turnovers.  In three of our last four games we have really executed well offensively.”

The run extended to 23-4 as Gerardot added four more quick points and was in double figures just 10 minutes into the game.  The Crusaders had a 26-8 advantage at the 9:58 mark.

The lead grew to 23, 40-17 by halftime as Laura Richards (Connersville, Ind./Connersville H.S.) drained a triple just before the break.

“We are getting better offensively, moving the ball better, and taking better shots,” Freeman stated.  “Our kids really responded after Thursday.  We had a hard day of film yesterday and I challenged them.”

Valpo extended its lead to 27, 57-30, at the 10:40 mark of the second half before Loyola went on its only run, a 12-1 spurt, to close within 16.  The Crusaders scored 11 of the final 15 points in the game and atoned for a 30-point loss in the first meeting between these two schools in Chicago.

“We have really taken a step forward since the last time we played them,” Freeman added.

The Crusaders held Loyola to just 32.1% shooting for the game.  The Ramblers entered the game as the league’s top three-point shooting team at 38.4% but made just 3-of-20 (15%) on the afternoon.

“We played defensively with a lot of passion today,” Freeman said.  “We were very disruptive.  It’s fun to watch our kids play as hard as they do.”

Lange pulled down 10 rebounds while Richards added nine points offensively for the Crusaders and handed out eight assists while committing just one turnover.

“Laura Richards has gone to a different level with her game,” Freeman concluded.  “Her toughness, grittiness, and desire helps the team win in ways other than scoring.”

Valparaiso (8-17, 4-10), winners of three of its last four games, will take to the road on Thursday, traveling to Green Bay, Wis. The Crusaders will face nationally-ranked Green Bay in a 7 p.m. tip.

Game Notes: Valparaiso leads the all-time series with Loyola 18-3 and is a perfect 10-0 all-time against the Ramblers at the ARC … Saturday’s game was a Play 4 Kay event in support of breast cancer awareness with female cancer survivors being recognized prior to tip-off … Varner passed Jill Otto (1985-1989) for 13th on the school’s career rebounding list with 540.