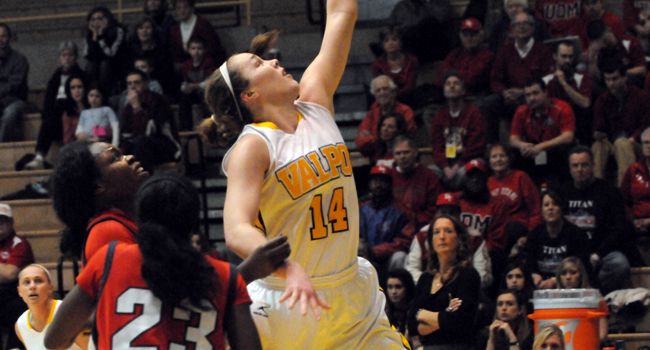 In a defensive battle that saw neither team lead by more than five points until the final second, Detroit came out on top of Valparaiso on Saturday afternoon 48-42 at the Athletics-Recreation Center, spoiling Senior Day for the Crusaders in the regular season finale for both schools.

“I’m really proud of the way our team battled,” head coach Keith Freeman said afterwards.  “We have been very consistent in our effort for the majority of the year.”

Vapo trailed by one at halftime but took a 26-25 lead on the opening possession of the second half on a jumper by Gina Lange (Wyoming, Minn./Forest Lake H.S.).  The Crusaders extended the lead to four, 32-28, after Laura Richards (Connersville, Ind./Connersville H.S.) connected from 15-feet with a pull-up jumper at the 14:17 mark.

Detroit answered with six straight points to retake the lead and the game went back-and-forth until Shareta Brown scored inside and was fouled with 7:45 to play to put the Titans on top for good, 39-38, with 7:45 to play.

The visitors extended the lead to five before Lange followed with a jumper and Ashley Varner (South Bend, Ind./Washington H.S.) followed with a basket at the two-minute mark to pull the Crusaders within 43-42.

Valpo got a defensive stop, but following a miss, Jalesa Jones made two free throws with 25 second to play to extend the lead to three.  A Crusader turnover forced Valpo to foul again and Detroit made five of six free throws in the game’s final 25 seconds to secure the win.

Tabitha Gerardot (Fort Wayne, Ind./Canterbury H.S.) led Valpo with 11 points while Lange added 10 more.  Varner finished her home career with nine points and nine boards, and moved into 11th on Valpo’s all-time rebounding list with 579 over her time with the Crusaders.

“Our goal is to be the team to win a Horizon League Tournament game,” Freeman concluded.  “We have to get fresh legs for Monday.”

Valparaiso (9-20, 5-13) will be on the road Monday evening for the first round of the Horizon League Tournament, traveling to Milwaukee, Wis. to battle the Panthers of the University of Wisconsin-Milwaukee.  Tip-off at the Klotsche Center is set for 7 p.m.