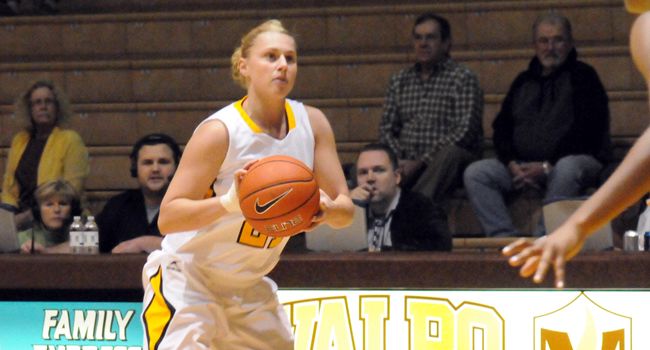 Upcoming in Crusader Basketball: After registering their first Horizon League Tournament victory since joining the conference on Monday evening, the Valparaiso Crusaders return to the hardwood on Wednesday evening in the quarterfinals to battle top-seeded and #10/10 Green Bay.

Head Coach Keith Freeman: In his 18th season on the Valparaiso bench, Keith Freeman has a 286-246 (.538) record at the helm of the Brown and Gold.  In his 23rd season overall, Freeman has a 415-293 (.586) career mark.  He is Valpo’s all-time winningest coach and has amassed more than half of the victories in the program’s history.

Series Notes: Valparaiso and Green Bay are meeting for the 29th time in a series that dates back to Dec. 9, 1986.  The Phoenix lead the overall series between the two schools 24-4 and have won nine straight meetings.  Green Bay won this year’s two regular season contests, 65-37 at the ARC on Jan. 28 and 72-36 in Wisconsin on Feb. 23.  Valpo’s last win in the series came on Jan. 19, 2008, a 90-88 overtime thriller at the ARC.  The Phoenix are 12-2 against the Crusaders in Green Bay and have won nine straight against Valpo in Wisconsin.  Valpo’s last win at Green Bay came on March 8, 1991, 72-69 in the semifinals of the North Star Conference Tournament.

Wrapping Up Milwaukee: In a defensive battle, the Crusaders never trailed on Monday evening, posting a 47-39 victory over the eighth-seeded Panthers in Milwaukee in the first round of the Horizon League Tournament.  Ashley Timmerman scored a career-high 20 points while Ashley Varner registered a double-double with 10 points and 13 boards.  Courtney Lindfors led Milwaukee with 13 points and 10 rebounds as the Crusaders held the Panthers to just 13 first half points.

Scouting Green Bay: The Phoenix have won seven straight games following a 77-64 victory on Saturday at UIC to close the regular season.  Julie Wojta, the Horizon League Player of the Year, leads the conference averaging 19.8 points and 10.3 rebounds per game.  Adrian Ritchie adds 12.2 points per game while Lydia Bauer chips in 11.9 points per night.  Green Bay is second in Division I with a +9.57 in turnover margin, forcing 25.4 miscues per contest.  The Phoenix’s 75.1 points per game ranks 11th nationally.

Getting it Done Defensively: Valparaiso’s defense has been the team’s backbone of the Crusaders this season.  The Brown and Gold ranks second in the Horizon League in scoring defense, allowing just 56.7 points per game.  Valpo is also second in holding the opposition to 37.1% shooting from the floor awhile leading the league allowing just 28.7% shooting from three-point range.  Laura Richards, who was named to the Horizon League’s All-Defensive Team, ranks second in the conference with 2.8 steals per game.

Timmerman Has Career Night: Senior Ashley Timmerman showed she did not want her Crusader career to come to an end on Monday night, scoring a career-high 20 points against Milwaukee.  She made 6-of-9 shots from the floor, including two triples, and was a perfect 6-of-6 from the free throw line.

Varner Earns Academic Honor: Ashley Varner was named as the Horizon League’s Scholar-Athlete of the Month for December.  The fifth-year senior averaged 13.7 points and 9.7 rebounds per game in seven contests during the month, posting four double-doubles.  In the classroom she is enrolled in graduate school working on her master’s degree in clinical mental health counseling after already earning a bachelor’s degree in psychology.

Gerardot Nearly Perfect: Tabitha Gerardot made 9-of-10 shots from the floor on Feb. 18 against Loyola (Chicago) on her way to a game-high 20 points.  The sophomore’s 90% shooting percentage ranks fourth in school history for a single game (minimum eight attempts).

Dialing Long Range: The Crusaders connected on 7-of-11 three-pointers against Butler on Feb. 11, connecting on 63.6% from long range.  The long range shooting ties for the eighth best single game percentage from beyond the arc in school history.

Getting to the Free Throw Line: Ashley Varner made 13-of-18 free throws against Cleveland State on Feb. 4. Her 13 free throws made tie her for fifth on Valpo’s single game list while her 18 attempts mark the third most by any Crusader in a game in school history.

This and That: The Crusaders’ 10th victory of the season on Monday night marked the team’s most victories since winning 16 in 2008-2009 ... Tabitha Gerardot registered a career high with four steals and matched her career best with three steals against Milwaukee on Monday ... Jessica Carr handed out a team-high five assists versus the Panthers ... Valpo is 1-31 all-time against ranked opponents, including an 0-19 mark on the road ... the Crusaders’ only win over a ranked opponent came against #21/23 Purdue on Dec. 10, 2008, a 71-60 triumph at the Athletics-Recreation Center.