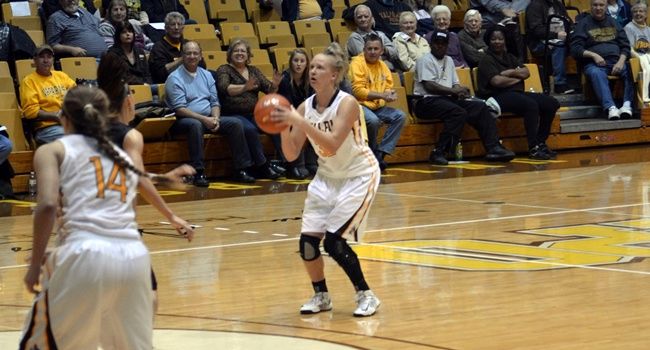 In its first public exhibition game under the guidance of first-year head coach Tracey Dorow, the Valparaiso women's basketball team unveiled an up-tempo style of play as the Crusaders ran to a 98-49 victory over Holy Cross [Ind.] on Monday night at the ARC.

“Ideally, we'd like to definitely get out and run as much as possible,” said Dorow.  “We have to be smart about it, but we definitely want to push and get ahead and try to get early baskets.  The key to that starts on the defensive boards, and I thought we did an outstanding job with our defensive rebounding tonight [43 defensive rebounds vs. 8 offensive rebounds for Holy Cross].”

Holy Cross led early on a pair of 3-pointers in the first four minutes, as the Crusaders struggled early on to get into the flow offensively.  With the game tied at nine just over seven minutes into the game, Valpo strung together a 17-2 run over a stretch of less than four minutes to push its lead into double digits for good.  Five different Crusaders scored during the run, with an old-fashioned 3-point play by junior Tabitha Gerardot (Fort Wayne, Ind./Canterbury) capping the run with 9:09 to play in the first half as Valpo led 26-11.  A late 11-2 run would help push the Crusader lead to 44-22 into the locker room at halftime.

The Crusaders left no doubt as to the result with an early second-half run, out-scoring the Saints 16-3 over a stretch of nearly five minutes to push their lead out to 33 points at 63-30.  The run included five points from sophomore Shaquira Scott (Wilmette, Ill./Loyola Academy).  Valpo continued to control the tempo throughout the second half, pushing the scoreline towards the final margin.

All 11 Crusaders who played on Monday scored at least two points and grabbed at least two rebounds, as all 11 also played at least 13 minutes each.  Leading the way in the scoring column was senior Ieva Jansone (Riga, Latvia/Agenskalna Gymnasium [Miles]), who went 7-of-9 from the floor and 7-of-8 at the free throw line for a game-high 22 points off the bench.  Gerardot scored 19 points and Scott 13, with the duo each sharing team-high honors with eight rebounds.

Redshirt junior Charae Richardson (Lafayette, Ind./Jefferson [Vincennes]) rounded out the quartet of Crusaders in double figures with 10 points in 18 minutes of play.  Valpo tallied 20 assists on its 32 baskets, led by six assists off the bench from freshman Lexi Miller (Caledonia, Mich./Caledonia), who also picked up three of Valpo's 10 steals.

“We talk about how we want to take unchallenged shots – how we want the highest-percentage looks,” said Dorow.  “I thought tonight we took a lot of pretty tough looks, and that's something we'll go back on the film and look it and use to learn from.  The good thing is that none of our players are selfish players – they all want to be team players – so they'll use this and get better from it.”

Holy Cross, coached by former Crusader Aimee [Litka] Niespodziany, was led by 11 points each from Lauren Malinowski and Angela Byrd, while Francesca McCarthy added 10 points.  Maggie Gondeck pulled down a team-high eight rebounds for the Saints, who were limited to just 28.8% (21-of-73) shooting for the game by the Valpo defense.

Valparaiso opens up the regular season at the ARC on Friday evening, Nov. 9 at 5 p.m. against Big Ten foe Indiana.  Fans are encouraged to wear white to help “White Out” the ARC.  The game can be heard live on WVUR (95.1 FM, Valparaiso) and seen live on the Horizon League Network, with links to both, as well as live stats, available at www.valpoathletics.com.