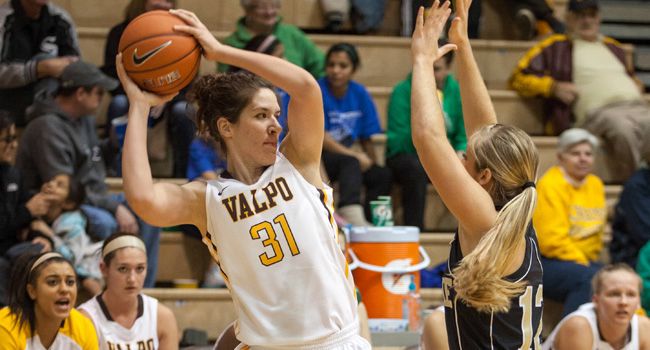 Next Up in Crusader Basketball: The Valparaiso women’s basketball team plays its fourth consecutive road game on Tuesday evening as the Crusaders trek to Macomb, Ill. to take on former Mid-Con rival Western Illinois. Valpo is in search of its first road win of the season.

Last Time Out: The Crusaders hung around with the nation's fourth-ranked team in #4/4 Duke early on Friday evening in Durham, N.C., but the Blue Devils eventually pulled away and defeated Valpo by a 90-45 final. Valpo was within 17-15 at the second media timeout, but Duke scored ten straight points to kick off a 31-7 run which ended the half.

The Road Ahead: The Crusaders return home to the ARC for their lone home game over a six-week stretch this Saturday, hosting Saint Louis at 1:35 p.m. Valpo then kicks off another run of four consecutive road games on Tuesday, Dec. 4 at IPFW.

Head Coach Tracey Dorow: Tracey Dorow was named the seventh head women’s basketball coach in Crusader program history in April of 2012. Dorow arrived at Valpo after spending 14 seasons as the head coach at Ferris State University, guiding the Bulldogs to four NCAA Division II Tournament appearances, two Great Lakes Intercollegiate Athletic Conference (GLIAC) North Division championships, and four 20-win seasons. In her 14 seasons at Ferris State, Dorow compiled a 232-163 (.587) record, including a 23-7 mark in 2011-2012 while guiding the Bulldogs to the second round of the NCAA Tournament.

Series Notes: Valpo and Western Illinois have met 35 times on the hardwood, 33 of which came as conference rivals in the Mid-Continent Conference. The Crusaders hold a 19-16 lead in the all-time series, but the Leathernecks hold a 10-6 advantage in games played at Macomb. WIU also took the last game in the series, downing Valpo last year at the ARC, 67-55.

Scouting Western Illinois: The Leathernecks enter Tuesday’s game at 1-4 on the season, with their lone win coming at home over NAIA foe Clarke. Among WIU’s losses have been games at Iowa State and at Missouri. The Leathernecks have three players scoring at least 11 ppg, as Saule Kontautaite averages 11.4 ppg and Michelle Maher and Charnelle Reed 11.2 ppg apiece.

A Long Road Trip, Part 2: While the Crusaders will return home Saturday for a game against Saint Louis, they will turn right back around and play four more road games in a row Dec. 4-20 to close out the run of eight road games within a nine-game stretch. Out of the eight road games, however, seven games are against teams either in Indiana or in states adjacent to Indiana, with the Duke trip the only long-distance trip for the Crusaders.

Facing Former Conference Foes: For the third time in four games, Valpo will face a former league rival on Tuesday, as the Western Illinois series harkens back to the Crusaders’ days in the Mid-Con. Previously, the Crusaders played against another former Mid-Con colleague in IUPUI and former Horizon League member Butler. However, none of the current players or coaches were around when Valpo was in the same league as IUPUI/Western Illinois, and of the 11 players who played this year against Butler, only six saw any minutes against the Bulldogs in the past.

Winning Her Debut: Head coach Tracey Dorow made her regular season debut a winning one on Friday, Nov. 17 by defeating Indiana. Dorow became just the second coach in Crusader women’s basketball history to win their Valpo debut on the sidelines, joining Dick Briars, whose 1983-1984 squad downed Hillsdale 71-67 in its season opener. With the win over Purdue Calumet, Dorow became the first Crusader women’s coach to win each of her first two games.

Downing the Big Ten: Valpo’s win over Indiana was just the second in program history over the Hoosiers, both of which have come at the ARC. The Crusaders previously defeated IU on Dec. 7, 1999 by a final of 64-60. Valpo’s last victory against a Big Ten team also came at the ARC on Dec. 10, 2008 over Purdue.

Roster Makeup: In her first season, Dorow is leading a squad which features eight returning letterwinners, including a trio of starters from last season. Five players are donning the Crusader uniform for the first time alongside the eight returnees as well.

More Returning Experience: A pair of seniors join Gerardot as returning starters entering the 2012-2013 season. Forward Gina Lange is back for her final year after posting 8.7 points and 5.3 rebounds per game as a junior. Meanwhile, guard Laura Richards led the Horizon League in minutes played (37.5
mpg) and finished second in the league in steals (2.8 spg) en route to a spot on the All-Defensive Team.

A Tough Schedule: The Crusaders have put together a challenging slate for the 2012-2013 campaign, including five contests against NCAA Tournament teams from a season ago. Highlights include the season opener at the ARC against Indiana, a game at perennial top-ten program Duke, and contests on the road versus 2012 NCAA Tournament qualifiers Michigan and Louisville.

Hitting the Glass: Valpo excelled early in the season in the rebounding tallies, and despite being out-rebounded 57-28 by #4 Duke, still ranks third in the Horizon League with a +2.6 average rebounding margin. The Crusaders out-rebounded Indiana in their season opener by 12 boards and had a massive +26 edge on the glass in the win over Purdue Calumet. Valpo has especially been active on the offensive boards, pulling down at least 11 offensive rebounds in each of its first five games.

Sharing is Caring: The Crusaders currently rank second in the league in the early going in assists/game, averaging 15.8 helpers per contest, led by four assists per game from Charae Richardson. Each of its first five games have seen Valpo assist on at least 63% of its made field goals. Last time out against Duke, despite being limited to just 18 field goals, the Crusaders tallied 15 assists, led by six by Richardson.

Earning League Honors: Sophomore Shaquira Scott showed little rust on the basketball court in her return after playing just 10 games last season due to injury. Scott was named the Horizon League Player of the Week following the first weekend of play after leading the Crusaders with 17 points on 7-of-12 shooting in the win over IU. The sophomore was Valpo’s first player to earn weekly honors from the league office since Ashley Varner on Dec. 28, 2009.

Leading the Way: Junior Tabitha Gerardot, who led the Crusaders in scoring and finished second on the team in rebounding a year ago, has consistently been among Valpo’s leaders on a game-by-game basis this year. Gerardot has paced Valpo in scoring three times in the first five games, and has at least tied for team-high honors on the glass in each of the last four outings. The junior posted a double-double (18 pts, 12 rebs) against Purdue Calumet and has been in double figures in scoring in four of Valpo’s five games. Gerardot ranks fourth in the league in both free throw pct. (.867) and blocked shots (0.8/gm).

Taking Advantage of Minutes: Redshirt sophomore Maegan Callaway played just eight minutes last Monday in the loss at Butler, but took full advantage of her playing time to lead the team in scoring and post a new career high. Callaway went 5-9 from the field and 2-3 from the foul line for a team-high 12 points. She also pulled down four rebounds, including a pair on the offensive glass.