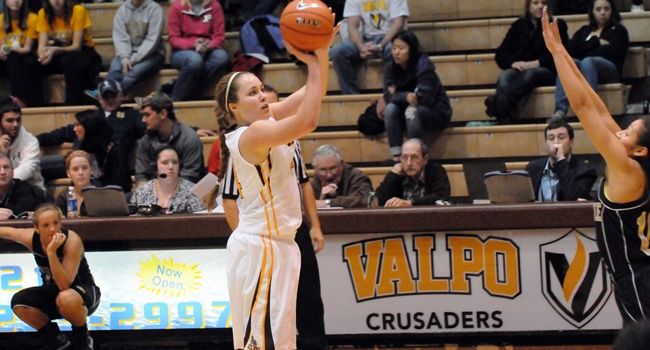 The Valparaiso women’s basketball team started the second half on a run to claim the lead Tuesday evening in Macomb, Ill., but Western Illinois would eventually re-claim the lead for good as the Crusaders fell by a final score of 69-55 to close out a four-game road trip.

Trailing by six at the break, the Crusaders surrendered the first three points of the second half to fall behind 37-28 with 19 minutes to play, but responded with a big run.  Junior Tabitha Gerardot (Fort Wayne, Ind./Canterbury) started the run with an inside basket, and the next time down the court, senior Gina Lange (Wyoming, Minn./Forest Lake) grabbed an offensive board and converted an old-fashioned 3-point play to quickly cut the deficit to 37-33.

After a pair of defensive stops, sophomore Shaquira Scott (Wilmette, Ill./Loyola Academy) knocked down a mid-range jumper to make it a two-point game at 37-35.  Then, after forcing a turnover, the Crusaders got another offensive rebound and utilized it to the max, as Lange connected on a 3-pointer, giving Valpo a 38-37 lead with 16:41 to play.  The 10-0 run encapsulated just 2:25 of game time.

The teams traded baskets over the next two minutes before a layup from Scott gave the Crusaders their largest advantage at 44-41 with 14:02 remaining.  But Valpo would score just two points over the next six-plus minutes as Western Illinois gained control with a 13-2 run, going ahead 54-46.  The Crusaders got within six points on multiple occasions the rest of the way, the latest coming on a pair of free throws with 2:47 to play, but could get no closer.

Western Illinois used an 11-2 run midway through the first half to go ahead by double digits, 24-14, with 8:18 remaining in the opening stanza.  Five points in a three-possession stretch by freshman Lexi Miller (Caledonia, Mich./Caledonia) helped cut the lead to five points, and Valpo would move within four twice in the first half, but a basket in the waning seconds of the opening stanza by the Leathernecks made it a 34-28 game at the break.

The Crusaders were led on Tuesday by the effort of Lange, who went 6-of-10 from the floor en route to team highs of 16 points and eight rebounds.  Gerardot added 10 points and five rebounds, while Scott chipped in six points and seven rebounds.  Valpo struggled from the floor, shooting just 29.2% (21-of-72), including just 3-of-16 (18.8%) from behind the arc, but did pull down 23 offensive rebounds.

Valparaiso (2-4) returns home to the ARC for its only home game in a nine-game stretch on Saturday afternoon at 1:35 p.m. as the Crusaders host Saint Louis.  The game can be heard live on WVUR, 95.1 FM, and seen live on the Horizon League Network.  Links for the live audio and video, as well as live stats, will be available at www.valpoathletics.com.