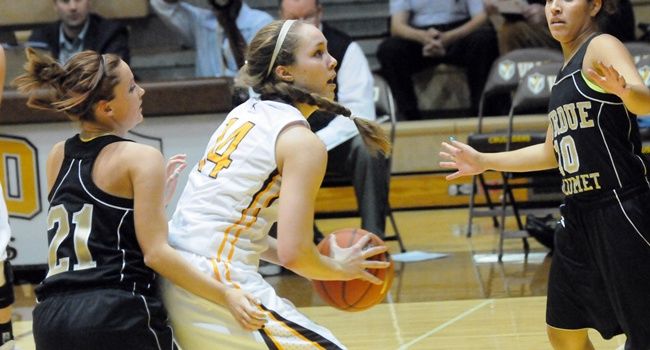 “Louisville is a very good team, quite possibly the best we have played this year,” Crusaders head coach Tracey Dorow said. “It was a lot of fun to play them here, but hopefully we learned that we are not quite there yet and still have some things to work on."

The Cardinals opened the game on a 12-0 run before a Gerardot jumper put the Crusaders on the board. After a Louisville 3-pointer, Laura Richards (Connersville, Ind./Connersville) got an offense rebound and made a jump shot to make it 15-4.

Gerardot scored seven of her points in the first half, including points on three-straight Crusader possessions. She also finished with a team-high seven rebounds.

Trailing 55-19 at the break, the Crusaders came out and scored on four of their first five second-half possessions. Charae Richardson (Lafayette, Ind./Jefferson [Vincennes]) had a pair of jumpers, and Gerardot and Gina Lange (Wyoming, Minn./Forest Lake) each tallied a basket.

“The start of the second half was a good part of us,” said Dorow. “We had a purpose and we came out and played much better and showed that we were better than we had played in the first half.”

Antonia Slaughter and Sara Hammond each scored 13 points to lead Louisville (9-1). The Cardinals had five players score in double figures.

Louisville forced 31 Valparaiso turnovers and scored 38 points off of those turnovers.

“They were really aggressive and ran quite a few traps,” Dorow said. “We didn’t execute the things we had practiced. They were athletic and physical and went after us.”

The Crusaders were out-rebounded 45-28 and gave up 23 offensive rebounds.

Valparaiso (3-6) returns to action on Wednesday, Dec. 19, when the Crusaders travel to Kalamazoo, Mich. to take on Western Michigan at 6:00 p.m. CT. The game can be heard live on WVUR, 95.1 FM, Valparaiso and online at www.valpoathletics.com, which will also have a link for live stats.