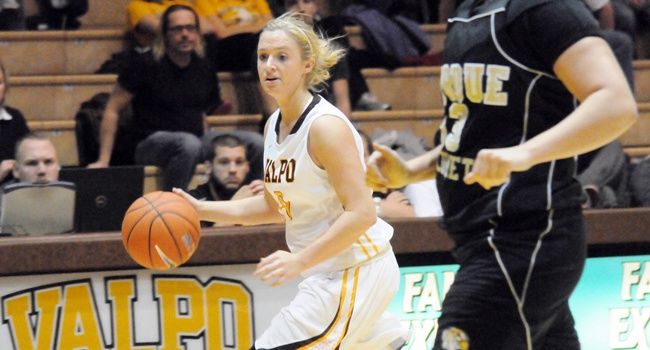 Jessica Carr (Arcadia, Ind./Hamilton Heights) scored a season-high six points, and the Valparaiso women’s basketball team trailed by seven early on in the first half against Michigan, but the Wolverines outscored the Crusaders by 20 over the rest of the half and went on to beat the Crusaders 73-32 on Thursday.

Carr hit a 3-pointer and Liz Horton (Cannelburg, Ind./Barr-Reeve) added a layup on Valparaiso’s next possession to get the Crusaders within seven at 16-9 and force a Michigan timeout with 13:10 left in the first half.

“Our energy level wasn’t where it needed to be for a game against a Big Ten team on national television,” Valparaiso coach Tracey Dorow said. “We have to play as a team if we are going to win ball games.”

The Wolverines closed the half on a 28-8 run to lead 44-17 at the break. Kate Thompson, who finished with a game-high 18 points, had 15 in the first half for Michigan.

Michigan shot 17-of-29 from the floor in the first half, while the Crusaders were limited to 7-of-27 shooting in the opening 20 minutes.

The Crusaders played even with Wolverines for the first few minutes of the second half, but then the Wolverines went on a 12-1 run to open the lead to 38. Michigan eventually built the lead to 45, by holding Valparaiso without a field goal for eight minutes.

Horton and Shaquira Scott (Wilmette, Ill./Loyola Academy each chipped with four points for the Crusaders, who shot 13-of-52 overall from the field and 5-of-22 from behind the arc.

Valparaiso (3-8) takes eight days off and returns to action on Saturday, Dec. 29 when the Crusaders host Ball State at the Athletics-Recreation Center at 1:35 p.m. The game will be broadcast on WVUR, 95.1 FM, Valparaiso and online at www.valpoathletics.com, which will also have a link for live stats.