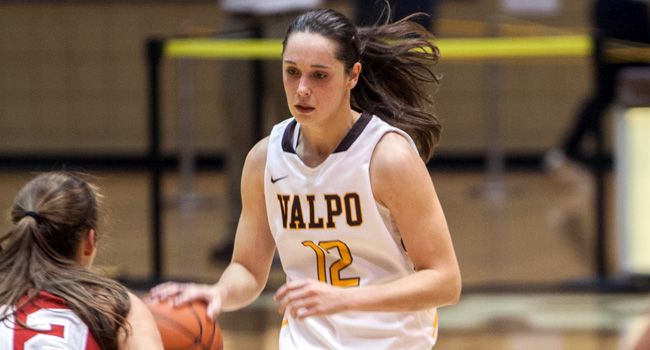 Next Up in Crusader Basketball: The Valparaiso women’s basketball team continues its four-game homestand at the Athletics-Recreation Center and closes out the non-conference portion of the schedule when the Crusaders host Northern Illinois at 1:35 on Saturday afternoon.

Last Time Out: The Crusaders trailed by 19 in the first half against Ball State, but Valparaiso rallied for a 58-53 win behind 28 points and 17 rebounds from Tabitha Gerardot, with both totals representing career-highs. Jessi Wiedemann and Shaquira Scott each chipped in with nine points.

The Road Ahead: The Crusaders continue their four-game homestand and begin Horizon League action when they host Youngstown State on Saturday, Jan. 12 at 1:35 p.m.

Following the Crusaders: The game will be broadcast live on the Horizon League Network, with Paul Oren and Renee’ Turpa on the call. A link for the live video, as well as  live stats, will be available through www.valpoathletics.com.

Series Notes: The Crusaders are 1-17 all-time against Northern Illinois, with the Huskies earning a 101-92 victory in the most-recent meeting on February 12, 1994 at DeKalb, Ill. The Huskies have won five-straight meetings, with Valparaiso’s lone win coming on February 18, 1992.

Scouting Northern Illinois: Northern Illinois enters the game with a 5-7 record on the year. Last time out, the Huskies defeated Norfolk State 69-38. Alexis Lindstrom scored 17 points to lead Northern Illinois. Natecia Augista added 12 points, and Amanda Corral chipped in with 11 for Kathi Bennett’s squad. The Huskies shot 9-of-15 from behind the three-point line. Corral leads Northern Illinois with 12.9 points per game. Satavia Taylor adds 9.4 points and Jenna Thorp pulls down 4.7 rebounds per contest. The Huskies are 1-1 against Horizon League teams, having beaten Loyola 67-63 and having dropped a 66-61 decision to UIC in overtime.

Long Road Trips: After opening the season with two home games, Valparaiso embarked on a pair of four-game road trips sandwiching a home contest against Saint Louis. The trips are the Crusaders’ first and second stretches of four consecutive true road games since Dec. 30, 2010-Jan. 8, 2011, while the last time Valpo had played four straight true road games outside of league play came Nov. 9-18, 2007.

Winning Her Debut: Head coach Tracey Dorow made her regular season debut a winning one on Friday, Nov. 17 by defeating Indiana.  Dorow became just the second coach in Crusader women’s basketball history to win their Valpo debut on the sidelines, joining Dick Briars, whose 1983-1984 squad downed Hillsdale 71-67 in its season opener.  With the win over Purdue-Calumet, Dorow became the first Crusader women’s coach to win each of her first two games.

Downing the Big Ten: Valpo’s win over Indiana was just the second in program history over the Hoosiers, both of which have come at the ARC.  The Crusaders previously defeated IU on Dec. 7, 1999 by a final of 64-60.  Valpo’s last victory against a Big Ten team also came at the ARC on Dec. 10, 2008 over Purdue.

Roster Makeup: In her first season, Dorow is leading a squad which features eight returning letterwinners, including a trio of starters from last season.  Five players are donning the Crusader uniform for the first time alongside the eight returnees as well. The squad is comprised of four freshmen, three sophomores, three juniors and three seniors.

Hitting the Glass: Valpo excelled early in the season in the rebounding tallies and currently ranks second in the Horizon League with a +1.9 average rebounding margin, which is one of only two positive margins in the league.  The Crusaders out-rebounded Indiana in their season opener by 12 boards and had a massive +26 edge on the glass in the win over Purdue-Calumet.  Valparaiso had a 47-27 rebounding edge in the win over Ball State. The Crusaders especially have been active on the offensive boards, pulling down at least 11 offensive rebounds in 11 of their 12 games. The Crusaders rank second in the Horizon League with 14.6 offensive rebounds per game.

Sharing is Caring: The Crusaders currently rank third in the league in the early going in assists/game, averaging 13.7 helpers per contest, led by 3.7 assists per game from Charae Richardson.  Each of its 12 games has seen Valpo assist on at least half of its made field goals.  Last time out against Ball State, Valpo tallied 11 assists on 17 field goals.

Connecting From the Floor: Valpo had its best game of the year from the floor against Western Michigan, converting on 27-of-53 (.509) from the field.  This was the second time the Crusaders made at least half of their field goal attempts, with the other coming in a 27-of-54 performance in the win at IPFW.

Setting a Record: The Crusaders were on the mark from behind the 3-point line against Western Michigan. Valparaiso shot 9-of-12 behind the arc against the Broncos, including three makes each from Liz Horton and Abby Dean. The .750 mark is the best team performance for a single game in school history.

Earning League Honors I: Tabitha Gerardot won her first-ever Horizon League Player of the Week honors for her efforts against Ball State. Gerardot recorded her second double-double of the season (and 15th of her career) with career highs in both points (28) and rebounds (17). The junior pulled down nine offensive rebounds and shot 10-of-11 from the free-throw line.

Earning League Honors III: Sophomore Shaquira Scott showed little rust on the basketball court in her return after playing just 10 games last season due to injury.  Scott was named the Horizon League Player of the Week following the first weekend of play after leading the Crusaders with 17 points on 7-of-12 shooting in the win over IU.  The sophomore was Valpo’s first player to earn weekly honors from the league office since Ashley Varner on Dec. 28, 2009.

Leading the Way: Tabitha Gerardot, who led the Crusaders in scoring and finished second on the team in rebounding a year ago, has consistently been among Valpo’s leaders on a game-by-game basis this year.  Gerardot has paced Valpo in scoring six times, and has at least tied for team-high honors on the glass eight times.  She posted a double-double (18 pts, 12 rebs) against Purdue-Calumet and has been in double figures in scoring eight times.

A Career Day: Liz Horton and Abby Dean both set career-best scoring marks against Western Michigan. Horton finished with 19 points on 8-of-9 shooting (3-of-3 behind the arc), while Dean tallied 11 points on 4-of-7 shooting (3-of-5 on three-pointers).