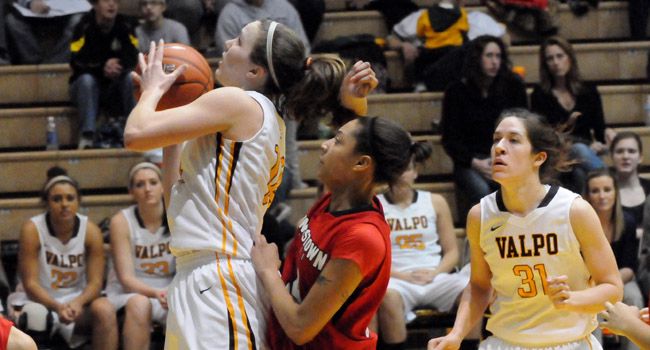 The Valparaiso women’s basketball team trimmed a 12-point second-half deficit down to one, but the Crusaders could not take the lead and lost to Loyola (Chicago) 52-44 on Wednesday night.

Trailing 27-15 with 16:55 to play, the Crusaders went on a 15-4 run to trim the Loyola lead to 31-30. Junior Tabitha Gerardot (Fort Wayne, Ind./Canterbury) who had her fourth double-double of the season with 17 points and 14 rebounds, scored eight points on the run, including the baskets that opened and ended the run.

“We dug ourselves a pretty big hole, but we played a pretty respectable second half all-in-all,” Valparaiso head coach Tracey Dorow said.

Sophomore Jessica Carr (Arcadia, Ind./Hamilton Heights) had all five of her points during the run.

The Ramblers built the lead back up to six, but Valparaiso cut it to one at 38-37 with 7:18 left on a jumper by senior Gina Lange (Wyoming, Minn./Forest Lake) and a 3-pointer from Gerardot.

A jumper from Gerardot trimmed the Loyola lead to 46-44 with 2:17 to play. The Crusaders had the ball with a chance to shoot for the tie or the lead, but Taylor Johnson picked up one of her six steals and her layup at the other end put the Ramblers up four.

“It was only a ten-point hole (at halftime), but we didn’t dig out of it,” Dorow said. “We were close, and we made it exciting at times.”

Loyola added a basket and a pair of free throws in the final minute to increase the final margin to eight.

Valparaiso scored six points over the rest of the first half and trailed 23-13 at the half.

The Ramblers forced 25 Valparaiso turnovers and converted them into 20 points.

Gerardot’s double-double was her second-straight, her third in four games and the 17th of her career.

Scott finished with seven points and six rebounds, and Lange added six points and nine boards. The Crusaders had a 43-30 edge on the glass.

Valparaiso (6-9, 1-1) starts a two-game road swing on Saturday, Jan. 19, when it heads to Chicago to take on UICat 3:00 p.m. The game will be broadcast on WVUR, 95.1 FM, Valparaiso, and online at www.valpoathletics.com, which will also have a link for live stats.