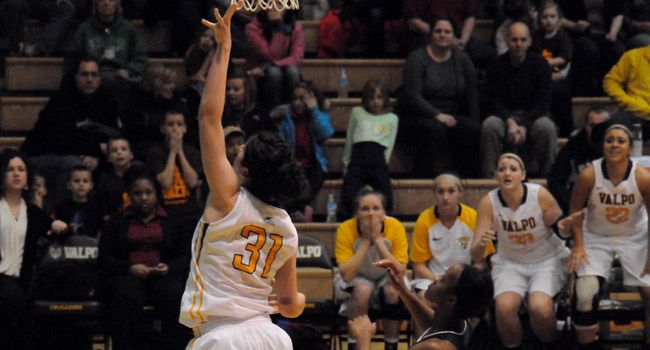 Gina Lange (Wyoming, Minn./Forest Lake) made a layup with 0.6 seconds left in regulation to send the game into overtime, and then the Crusaders dominated the extra five minutes to pick up a 92-84 victory over Cleveland State on Saturday afternoon at the ARC.

Lange slipped past her defender and took the inbounds pass from Laura Richards (Connersville, Ind./Connersville) and scored to tie the game at 75 and put the Crusaders into overtime.

“They executed it perfectly,” Crusader coach Tracey Dorow said. “Gina took her time and scored. Laura got it into her. She zipped it in, so there was no chance for a steal.”

Gerardot opened the scoring in the extra session with a layup in transition and followed with a put back of her own miss give Valpo a 79-75 lead.

Lange followed with a basket, and after the Vikings came within one at 81-80, Gerardot had a three-point play to put the Crusaders up 84-80 with 2:17 left.

Twice the Vikings closed to within two, but Valparaiso had an answer each time. Gerardot put back a rebound of her own miss, and later Lange knocked down a jumper to make it 88-84 with 27 seconds to go. Richards and Gerardot added free throws in the final 15 seconds to make the final margin eight.

Gerardot led the Crusaders with 32 points and a career-high 19 rebounds, including eight on the offensive glass. She recorded her second-straight double-double and seventh of the season (20th career).

Lange totaled a career-best 24 points on 11-of-15 shooting. She scored 17 of her points in the second half and overtime.

The Crusaders surged out of the gate, taking a 16-2 lead in the first six-plus minutes. Lange had seven points in the early going before sitting the rest of the first half with two fouls.

Cleveland State closed to within two at 29-27, but Valparaiso finished the half on an 8-2 run to lead 37-29 at the break. Gerardot had 11 points in the first half and Shaquira Scott (Wilmette, Ill./Loyola Academy) had nine.

Cleveland State took its first lead of the game at 46-44 on a jumper from Honesty King with 14:58 left in regulation. Lange answered with a basket on the following possession to tie the game, and Gerardot put Valpo back in front with a 3-pointer.

Valpo used a 7-0 run to lead 58-50 with 10:47 left. Richards and Lange had baskets and Jessi Wiedemann buried a 3-pointer from the corner.

The Vikings kept chipping away at the lead and tied the game at 73 on two free throws from Shalonda Winton, and a jumper from Kiersten Green put the Vikings ahead 75-73 with 1:02 to play. The Crusaders had two possessions to tie the game but couldn’t.

Green missed the front end of a one-and-one with six seconds left. The Crusaders got the ball past half court and took a time out to set up Lange’s tying basket.

Valparaiso finished with a 54-35 edge in rebounds. The Crusaders had 20 offensive rebounds, leading to 20 second-chance points. Valpo had a 60-32 edge in points in the paint.

“We really did a good job of focusing on going up and pursuing the ball today,” Dorow said.

Valparaiso (8-12, 3-4 HL), which is now 6-3 at the ARC this season, has a week off before closing out the first half of Horizon League play on Saturday, Feb. 9 at Detroit. The game tips and 1:00 p.m. CT and can be heard live on WVUR-FM 95.1, Valparaiso. A link for the live audio, live video from the Horizon League Network and live stats can be found on www.valpoathletics.com.