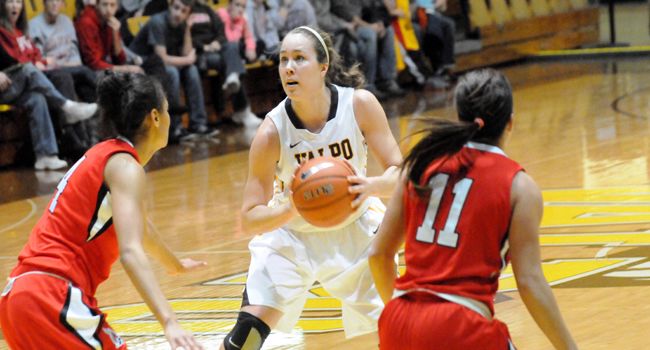 Next Up in Crusader Basketball: The Valparaiso women’s basketball team closes out a two-game home stand and goes for the season sweep against Milwaukee at 7:05 p.m. on Thursday.

Last Time Out: Valparaiso trailed UIC by as many as 11 in the first half, but the Crusaders outscored the Flames by 32 in the second half to pull away for an 88-62 win on Saturday. Tabitha Gerardot led Valpo with 18 points and 14 rebounds. Gina Lange totaled 15 points, and Lexi Miller added a career-best 13. All 11 Crusaders who dressed scored at least two points.

The Road Ahead: The Crusaders have a quick turn-around when they hit the road to visit first-place #25/RV Green Bay at 2 p.m. on Saturday, Feb. 23.

Following the Crusaders: The game will be broadcast live on WVUR-FM, 95.1, Valparaiso, with Joey Basil and Seth Strelow on the call. A link for the live audio, as well as video from the Horizon League Network, and live stats will be available through www.valpoathletics.com.

Head Coach Tracey Dorow: Tracey Dorow (9-14) was named the seventh head women’s basketball coach in Crusader program history in April of 2012.  Dorow arrived at Valpo after spending 14 seasons as the head coach at Ferris State University, guiding the Bulldogs to four NCAA Division II Tournament appearances, two Great Lakes Intercollegiate Athletic Conference (GLIAC) North Division championships, and four 20-win seasons.  In her 14 seasons at Ferris State, Dorow had a 232-163 (.587) record, including a 23-7 mark in 2011-2012 while guiding the Bulldogs to the second round of the NCAA Tournament.

Series Notes: The Crusaders are 7-14 all-time against Milwaukee. Valparaiso won the meeting earlier this season, coming away with an 84-72 road victory on Jan. 24. Tabitha Gerardot posted a career-high 33 points while also grabbing 10 rebounds. Shaquira Scott poured in a career-best 22 points, and Charae Richardson added 14. The Crusaders shot .509 from the floor (29-of-57). Ashley Green scored 21 points to lead the Panthers.

Scouting Milwaukee: The Panthers enter the game with a 6-16 record (2-8 HL) on the year. Last time out, Milwaukee beat Cleveland State 73-72 on Saturday. Janna Swopshire scored with 4.9 seconds left to give the Panthers the win. Angela Rodriguez scored 16 points and dished out nine assists to lead Milwaukee. Sami Tucker added 12 points and nine rebounds, while Ashley Green had 10 points. Rodriguez leads the Panthers with 13.7 points per game, which is 10th-best in the Horizon League. Tucker (12.6), Green (11.6) and Emily Decorah (10.9) also average double-figure scoring marks. Tucker leads Kyle Rechlicz’s squad with 7.3 rebounds per game (7th in HL).

Sweet Home ARC: Valparaiso opened the season by playing eight of its first 11 games on the road. While the road hasn’t been kind to the Crusaders, they have hit their stride at the Athletics-Recreation Center. Valparaiso is 7-3 at the ARC this season, including three wins during a four-game home stand. With seven home wins, Valpo has surpassed last season’s win total (six) at the ARC.

Winning Her Debut: Head coach Tracey Dorow made her regular season debut a winning one on Nov. 17 by defeating Indiana. Dorow became just the second coach in Crusader women’s basketball history to win their Valpo debut on the sidelines, joining Dick Briars, whose 1983-1984 squad downed Hillsdale 71-67 in its season opener.  With the win over Purdue-Calumet, Dorow became the first Crusader women’s coach to win each of her first two games.

Gerardot Named Preseason Second Team: Junior forward Tabitha Gerardot was a preseason Second Team All-League choice, and she is earning those accolades.  Gerardot, who averaged 13.0 points per game and 6.8 rebounds per contest in 2011-2012, averages 14.9 points and 8.9 rebounds per game. She is one of four Horizon League players to rank in the top-10 in the league in both scoring and rebounding. With 18 points against Wright State, Gerardot passed the 1,000-point mark for her career. She is 11th on the VU all-time scoring list with 1,079 and needs three points to move into 10th. She was recently named Horizon League Female Scholar-Athlete of the month for January.

Hitting the Glass: Valpo has excelled early in the rebounding tallies and currently ranks second in the Horizon League with a +5.0 average rebounding margin.  Valparaiso had a 47-27 rebounding edge in the win over Ball State and out-rebounded Youngstown State 46-22. The Crusaders had a 48-27 advantage against UIC. Against Cleveland State, Valpo had a 54-35 rebounding edge. Valpo has been active on the offensive glass, pulling down at least 11 offensive boards in 20 of their 23 games. Valpo ranks second in the HL with 14.1 offensive rebounds per game. All nine Crusader wins have come when they  have out-rebounded their opponents.

Comeback Kids: Three times this season, Valparaiso has rallied from first-half deficits of at least 11 points to come back and pick up the win. Against Ball State, the Crusaders trailed 27-8 and outscored the Cardinals 50-26 the rest of the way to win 58-53. Against Youngstown State, Valpo trailed 34-19 before finishing the game on 48-25 run to claim a 67-59 win. Valpo trailed UIC 23-12 and then outscored the Flames 76-39 over the final 28 minutes to win 88-62.

Sharing is Caring: The Crusaders currently average 14.0 assists per contest. Valparaiso is led by 3.7 assists per game from Laura Richards and 3.5 from Charae Richardson.  Richards is third in the HL with an assist/TO ratio of 2.2. This season, Valpo has assisted on at least half of its made field goals 22 times.  Against UIC, Valpo had 18 assists on 30 hoops, with Richards dishing five.

Earning League Honors I: Junior Tabitha Gerardot has won Horizon League Player of the Week honors three times this season, including being the most recent honoree for posting a pair of double-doubles against Wright State and Cleveland State. Gerardot put up 18 points and 10 rebounds against the Raiders, and then she bettered that with 32 points and a career-high 19 boards in a win over the Vikings. Gerardot was honored earlier this season for posting double-doubles against Ball State (Dec. 29) and Youngstown State (Jan. 12). Against the Cardinals, Gerardot totaled 28 points and 17 rebounds, and she  had 26 points and 17 rebounds against the Penguins.

Leading the Way: Tabitha Gerardot, who led the Crusaders in scoring and finished second on the team in rebounding a year ago, has consistently been among Valpo’s leaders on a game-by-game basis this year.  Gerardot has paced Valpo in scoring 10 times, and has at least tied for team-high honors on the glass 14 times.  She has posted eight double-doubles (21 career) and has been in double figures in scoring 14 times.

A Career Day: Freshman Lexi Miller set a number of career-highs in Valpo’s 88-62 win over UIC. Miller scored a career-best 13 points, and she also totaled career-highs in field goals (four), 3-pointers (three) and assists (three). She also banked-in a 3-pointer from 50 feet to just beat the halftime buzzer.

Excelling in League Play: The Crusaders have turned things up a notch in Horizon League games, scoring 69.0 points per game (5th) and have the second-best field goal percentage at .447 (255-of-570). Valpo is the top rebounding team in HL games (41.9 per game) and also leads the league with a +9.0 rebounding margin. Tabitha Gerardot, who has posted six double-doubles in 10 HL games, is second in scoring in conference games (18.1) and second  in rebounding (10.6). Gina Lange has a league-best field goal percentage of .588 (47-of-80) in Horizon League contests, and Charae Richardson’s .921 (35-of-38) free-throw percentage is tops in the league.