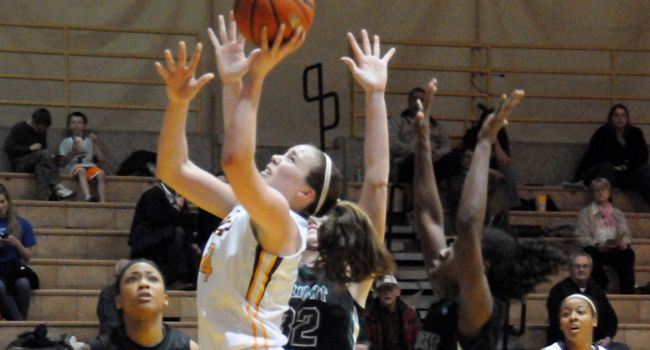 Junior Tabitha Gerardot (Fort Wayne, Ind./Canterbury) recorded her 10th double-double of the season, and senior Gina Lange (Wyoming, Minn./Forest Lake) and sophomore Shaquira Scott (Wilmette, Ill./Loyola Academy) also scored in double figures, but Cleveland State outscored the Crusaders by 10 over the final 6:15 and came away with a 58-54 win on Saturday afternoon at the Wolstein Center.

Gerardot, who finished with 18 points and 14 rebounds, scored 13 points and grabbed nine rebounds in the second half. The double-double was her second-straight and the 23rd of her Valparaiso career.

Cleveland State got back-to-back baskets from Imani Gordon and Shalonda Winton gave the Vikings a 55-52 advantage. The teams went scoreless for the next two minutes before Honesty King added a free throw to move Cleveland State’s lead to four with 31 seconds left.

Gerardot had a put back of a missed free throw from Scott with eight seconds left to get Valparaiso within two, but Gordon made two free throws in the final seconds to preserve the win.

Cleveland State followed up with a 12-0 run to lead 43-38 at the 10:21 mark. Winton had a pair of 3-pointers, while Gordon added four points and Honesty King chipped in two.

Valpo answered back with an 11-0 run to lead 49-43. Scott started with two free throws and followed with a basket. Gerardot recorded a three-point play, and then Scott finished the run with two more baskets.

Lange scored 12 points and grabbed six rebounds for the Crusaders, with 10 coming in the first half. Scott chipped in with 10, with all of her points coming in the second half. Sophomore Jessica Carr (Arcadia, Ind./Hamilton Heights) added five points, four rebounds and four assists.

Valparaiso (9-18, 4-10) finishes up a two-game road trip on Monday, Mar. 4, when the Crusaders pay a visit to Youngstown State. The game tips at 6:05 p.m. CT, and it can be heard live on WVUR-FM 95.1. Links for the live audio, live video from the Horizon League Network and live stats will be available on www.valpoathletics.com.