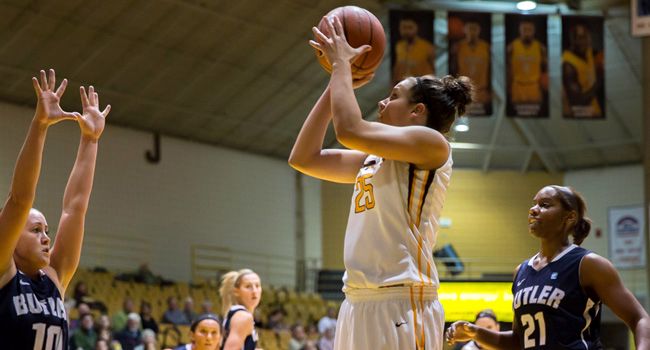 Butler assembled one too many runs Friday night as they defeated Valpo 65-50 at the Athletics-Recreation Center in Valparaiso. Three Crusaders finished the evening in double digits, but Daress McClung and Taylor Schippers combined for 39 points as the Bulldogs downed their former Horizon League rival.

The teams traded 9-0 runs to open the game as Jessi Wiedemann's (Palatine, Ill./Fremd) 13th three-pointer of the season tied it at the 14 minute-mark. Butler responded with a 12-0 surge thanks to three treys from Schippers. All nine of her first-half points came in a span of under three minutes.

McClung shot 6-for-9 from the floor in the first half as her 12 points boosted Butler to a 35-17 lead at the break. The Bulldogs enjoyed a 16-7 advantage in points off turnovers in the first twenty minutes.

The Crusaders battled back in the second half. An Abby Dean (Carmel, Ind./Carmel) layup cut the deficit to single digits with eight minutes to play. However, Butler's Ijeoma Uchendu registered a layup of her own 15 seconds later, and the Bulldogs' never relinquished their double-digit margin.

Liz Horton (Cannelburg, Ind./Barr-Reeve) continued her stellar shooting from the perimeter, knocking down two of four attempts from beyond the arc. The senior contributed 10 points. It was her fourth consecutive game in double digits.

"I was disappointed with our energy level. Give Butler credit, though. They shot the ball well. We have to improve our field goal defense," head coach Tracey Dorow said. Butler shot 25-of-56 (44.6%) for the game.

One effective trend that continued for the Brown and Gold was the free-throw shooting. Valpo was a perfect 10-for-10 from the charity stripe, as the Crusaders raised their Horizon League-leading percentage to an impressive 79.6 percent.

Valparaiso (2-8) will not return to the court until December 29th when it hosts Western Michigan (3-5) at the ARC. Tipoff is slated for 1:35 pm CT.