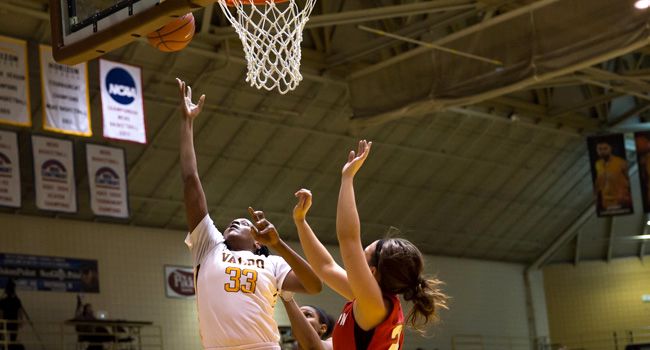 Valpo concocted one of its best 40-minute efforts Saturday, but Kim Demmings and the Wright State Raiders were too much for the Brown and Gold. The Raiders increased their record to 14-5 with a 79-65 victory over the Crusaders.

Demmings led all scorers with 31 points. The junior was successful on just seven of her 21 field goal attempts (five three-pointers), but converted 12 of her 17 free-throw tries.

The Crusaders shot a season-best 54.3% from the floor, but an eleven-point disparity from the free-throw line coupled with 23 turnovers led to their third loss in Horizon League play.

Sharon Karungi (Kampala, Uganda/[Northern Oklahoma College]) compiled one of her best statisical performances of this season. Karungi was 8-of-10 on field goals, and 3-for-3 from the line en route to a 19-point afternoon. The junior is now averaging 14.7 points/game in league play.

Despite superb overall numbers, perimeter shooting continues to hamstring Valpo. The Crusaders shot just 1-of-9 from three-point range Saturday after finishing 1-for-11 there Wednesday against Oakland. Free-throw shooting maintains a strength for the Brown and Gold. Valpo was 14-for-19 from the foul line Saturday.

The Raiders enjoyed a 19-5 advantage in the offensive rebounding category. The 19 offensive boards allowed were three off the season-high mark set by #6 Notre Dame on November 16th.

Jessi Wiedemann (Palatine, Ill./Fremd) pushed her way back into double figures. The sophomore put an end to a three-game scoring slump by shooting 6-of-10 for 12 points. She added four assists and three steals to her stat sheet.

Valparaiso kept within striking distance for the majority of the first half. Wright State didn't seize a double-digit lead until the five-minute mark via a Demmings' triple. A pair of layups by Karungi and Wiedemann quickly trimmed the WSU lead to six.

The Raiders went into halftime with a 37-29 break.

Wiedemann made all her shot attempts inside the arc as her 10 points paced Valpo in the first half. Karungi chipped in eight of her own. Overall, the Crusaders did the majority of their damage inside as 24 of their 29 first-half points came in the paint.

Wright State emerged from the locker room to extend its lead to 13 thanks to an 8-3 rush. Karungi cut it to eight with a nice dish from Wiedemann. However, the Raiders cashed in on their free-throw opportunities down the stretch. Demmings scored four straight from there while Ivory James gave Wright State its larger lead with six minutes remaining via an old-fashioned three-point play.