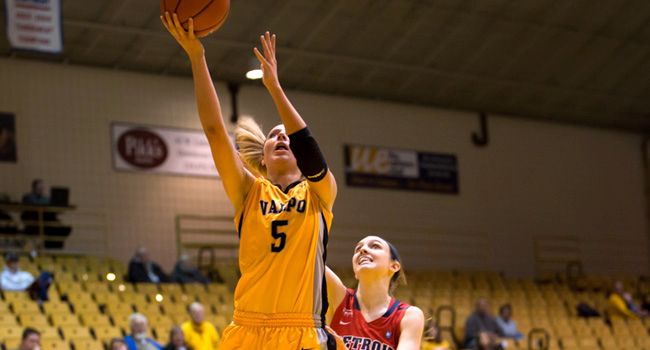 The Crusaders clicked on all cylinders Thursday night versus Detroit and were handsomely rewarded to the tune of an 85-44 win at the Athletics-Recreation Center.

"No one came out and tried to do too much. Our defense did a tremendous job stopping their best player. I'm really proud of the way we communicated and that's not something we've been able to sustain for 40 minutes consistently," head coach Tracey Dorow said.

The two teams went back-and-forth for the first five minutes of the contest. Richardson had already tossed in six of her 16 points by the time Detroit's Reyna Montgomery made a layup to cut the Crusader lead to 13-11.

From that point, Valparaiso embarked on an astonishing 35-2 run to close the first half. Just as the Brown and Gold suffered a field goal drought in the second half of their game Tuesday at UIC, the Titans failed to make a shot during the final 14:20 of the first stanza. Aggressive defense by Carr, Dean, and Richardson forced 14 Detroit first half turnovers. As a team, Valpo registered 12 steals by halftime, two more than their season-best ten accrued in 40 minutes against Chicago State on December 6th.

The Titans never drew closer than 32 points in a second half that saw the Brown and Gold spread 37 points amongst eight players. Jazmin Taylor (Rock Island, Ill./Rock Island) knocked down all four of her free-throw attempts while Sharon Karungi (Kampala, Uganda/[Northern Oklahoma College]) scored nine points and grabbed seven boards off the bench.

Overall, the Crusader defense forced 25 turnovers, a season watermark. Carr's seven steals were the most by a Valpo player since Katie Boone accomplished the same feat on February 1st, 2003 against UMKC. The junior also notched eight points and four assists on the night.

Detroit's Senee Shearer entered Thursday's game as the Horizon League's leading scorer at 21.1 points per game. The senior was limited to 10 points after fouling out with 4:29 to play.

The 41-point triumph represented the largest margin of victory for Valparaiso (3-15, 1-4 Horizon) since February 13th, 2010 when they trumped Youngstown State 80-28 at home.

"I'm so proud of these kids and the way they bounced back from the heartbreaking loss against UIC Tuesday night. When you've invested as much as these girls have, it hurts. We played the best 40-minute team effort I've seen since I arrived here," Dorow said.

Valpo sported its road gold jerseys at home for the first time all season. The Crusaders host Cleveland State (8-10, 3-2 Horizon) Monday night at 7:05 pm at the ARC.

Despite denying superstition, Dorow entertained the thought of a repeat wardrobe switch.

"Cleveland State is green, so we might," Dorow laughed.