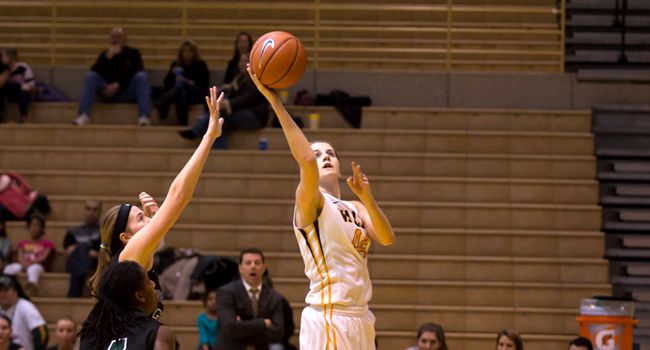 The Crusaders had no problem shooting the ball Monday night, but holding on to it was another story. Valpo shot 52% (26-of-50) from the field but committed 23 turnovers in a 76-66 loss to Cleveland State at the Athletics-Recreation Center.

The Brown and Gold received a career night from Jessi Wiedemann (Palatine, Ill./Fremd) on the offensive side of the ball as the sophomore led the way with 21 points on 8-for-14 shooting. Senior Liz Horton (Cannelburg, Ind./Barr-Reeve) sustained her elevated play. Horton tossed in 15 points and six rebounds. Monday's game was her third in a row with 14 or more points.

Reminiscent of the Oakland game, Cleveland State appeared content to fire up three-pointer after three-pointer. Overall, the Vikings made good of 15 of their 33 attempts from the perimeter. Adesuwa Aideyman made seven alone as the sophomore registered a career-high 22 points.

The contest stayed a two-possession game either way for the vast majority of the first half. Cleveland State opened its lead to 30-23 on Aideyman's fourth triple of the night with 2:45 left. Aideyman wasn't finished as she knocked down another three on the very next Viking possession.

Cleveland was ahead 36-26 at the conclusion of a first half that featured 15 Crusader turnovers.

Valpo surfaced from the break to open the second half on a 7-0 run to cut the deficit to three points. Cleveland State answered right back with an 8-1 surge of its own capped off by a Cori Coleman trey.

The Vikings endured a six-minute stretch where they made just one field goal, but Valpo drew no closer than four points.

Cleveland State closed out the 76-66 win as it owned a 20-3 edge in points off turnovers.

Abby Dean (Carmel, Ind./Carmel) continued to shoot lights out as she recorded her second 5-for-7 night from the floor in the last three games. The sophomore has landed at least 70% of her field goal attempts since January 21st at UIC. Dean also pulled down seven rebounds Monday night.

Head coach Tracey Dorow remained upbeat about her team's play as of late.

"This team has made incredible strides since Christmas time. You look at our roster and coming into this season, we didn't have a lot of game experience. Our players have gotten that now and we're starting to see improvements," Dorow said.

The Crusaders (3-16, 1-5 Horizon) will have a few days off as they prepare for their Wisconsin swing trip. They'll take on Milwaukee (6-12, 2-3 Horizon) Saturday at 2 pm before traveling north to battle the defending HL champion Green Bay Phoenix (10-7, 3-2 Horizon) Monday in a 7 pm tip. Links to the audio, video, and live stats will be available at valpoathletics.com.