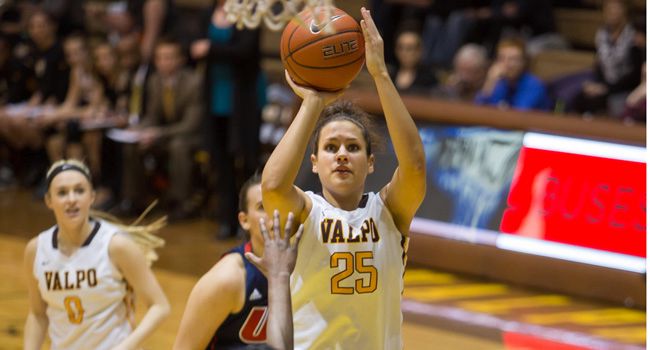 UIC constructed a 16-2 run early in the ballgame to jump ahead 31-12 at the 9:29 mark. The Flames took advantage of second and third chances as the margin widened quickly. Valpo responded right back with a 20-4 run of its own to cut the deficit to three with 2:20 on the clock. UIC appeared poised to take a comfortable lead into the locker room after Terri Bender converted an old-fashioned three point play with 38 seconds remaining.

But an Emily Kobel three-point try with six seconds to go in the half clanged out and Lexi Miller (Caledonia, Mich./Caledonia) collected the rebound. Miller had three seconds to dribble before tossing up a desperation half-court shot from the Crusader shield. The heave banked off the glass and in to cut UIC's lead to 42-37 at the break. The triple represented Miller's second half-court launch made against UIC as she accomplished the same feat last season on February 16th.

Katie Hannemann recorded 15 of her game-high 29 points in the first stanza. Senior Liz Horton (Cannelburg, Ind./Barr-Reeve) led the Brown and Gold in scoring at the half with nine points.

UIC came out blazing in the second half as a 17-4 surge put the Flames back ahead in double digits. Valpo was able to move within eight points with a minute to play but it was as close as the Crusaders came. The Flames held on to win 82-73 and advance to 7-4 in Horizon League play.

Ruvanna Campbell added another double-double to her resume with 14 points and 11 boards. Rachel Story also tossed in 14 in the winning effort.

The Crusaders committed 16 turnovers on the evening. Jessica Carr (Arcadia, Ind./Hamilton Heights) had a tidy five assists as the junior now boasts 34 on the season.