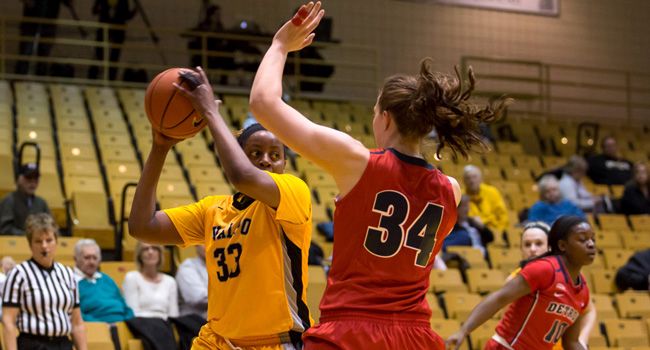 For the second game in a row, Valpo shot 50% from the field but Cleveland State's out-of-this-world perimeter shooting led the Vikings to an 82-74 win Thursday evening at the Wolstein Center.

Sharon Karungi (Kampala, Uganda/[Northern Oklahoma College]) had her most efficient game in a Crusader uniform as the junior posted a career-high 25 points on 12-of-14 shooting. Karungi accomplished all this in just 22 minutes off the bench.

Jessi Wiedemann (Palatine, Ill./Fremd) turned in another solid game for the Brown and Gold. Wiedemann scored 16 points and dished out two assists to one turnover. Thursday was the fifth time in her last six games that the sophomore finished in double figures.

The game got off to an ominous start with Cleveland State getting nine of its first eleven points via the three-ball. The Vikings retained a single-digit lead the entire first twenty minutes.

Of Cleveland State's 16 first-half field goals, ten were from downtown. The 62.5% (10-for-16) figure from outside was the highest surrendered in a half all season by the Crusaders. Seven of the eight Vikings that logged minutes in the opening twenty minutes knocked down at least one triple. CSU leapfrogged from 18 to 33 points all via treys.

Karungi caught fire at the 6:38 mark to keep the Crusaders close. The junior recorded ten straight Valpo points as she converted on each of her first seven shots from the floor.

Valpo burst out of the locker room to open the final half on a 7-0 run, bringing the contest to a 42-42 tie.

Karungi and Liz Horton (Cannelburg, Ind./Barr-Reeve) put the Brown and Gold ahead 48-45 as an assortment of inside shots countered a Cori Coleman three-pointer.

Valpo enjoyed its largest lead of the evening a minute and a half later when Karungi fed Wiedemann for a layup to give the Crusaders a 52-47 advantage.

The Vikings clawed their back ahead at the 9:28 mark thanks to Coleman's fourth triple of the tilt. The three-ball from the corner put the home team on top 57-56. The game seesawed back Valpo's way thanks to Wiedemann's only trey at 6:44.

Imani Gordon dropped three of her 15 points on the next CSU possession as the Vikings reclaimed a 64-63 edge. Olivia Voskuhl pushed the Vikings ahead for good with a three-pointer from the top of the key with five and a half minutes remaining.

Cleveland State extended its lead to much as ten points down the stretch. A Jessica Carr (Arcadia, Ind./Hamilton Heights) triple with :29 seconds remaining was the first Crusader field goal since an Abby Dean (Carmel, Ind,/Carmel) layup at the 3:50 mark.

CSU prevailed in an 82-74 final. Entering Thursday's game, the most three-pointers Valpo had allowed were 15 to Cleveland State on January 27th. The 17 made tonight represents a new watermark.

Valpo's trip through northeast Ohio continues Saturday when the Youngstown State Penguins (10-12, 6-3 Horizon) host the Crusaders Saturday afternoon. Tipoff will come at 3:35 pm CT. Links to the audio, video, and live stats will be available at valpoathletics.com.