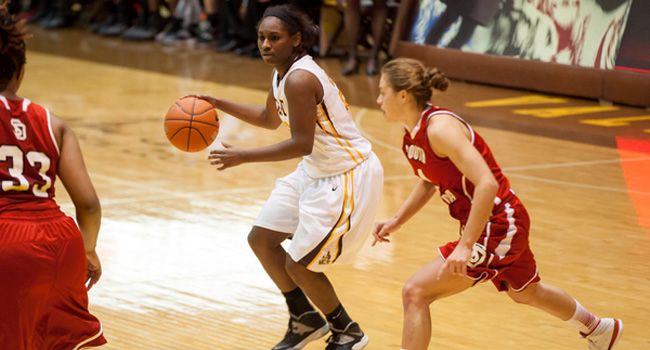 Charae Richardson (Lafayette, Ind./Jefferson [Vincennes]) had her best offensive output since Dec. 1st, but Youngstown State drained a season-best 13 three-pointers in an 84-56 win over the Brown and Gold at the Beeghly Center in Ohio.

Liz Hornberger scored the next five YSU points as the Penguins enjoyed their first double-digit lead with eight and a half minutes to play in the first half.

Richardson trimmed it to eight right out of the under 8:00 media timeout with a layup, but Youngstown responded with a 13-2 run to move comfortably ahead 36-17 going into the final media break of the half.

A Lexi Miller (Caledonia, Mich./Caledonia) lay-in moved Valpo to within 12 points with 18 seconds on the clock. YSU's Hornberger put the finishing touches on a fine first half with a deep three at the buzzer to give the Penguins a 42-27 halftime lead.

Hornberger was 4-for-4 from beyond the arc as her 14 points led all scorers at the break. Overall, Youngstown State shot 9-of-15 from three-point range in the first half.

A 15-3 Penguin push over the final six and a half minutes blew the game wide open as YSU capitalized on a 19-1 free throw advantage.

Karungi finished with twelve points for the Crusaders, as the junior has now tallied doubled figures in back-to-back-to-back games for the first time since December 6th-13th.

Liz Horton (Cannelburg, Ind./Barr-Reeve) missed her first game of the season with a back injury. The senior is considered day-to-day.

Valpo matched a season-best in offensive rebounds allowed with six. The Crusaders committed just 14 turnovers for the second straight game.

The Penguin bench outscored Valpo's 32-5 in Saturday's win. Touvelle made four of her seven attempts from outside to register 14 points.

Next Saturday will serve as Valpo's Play 4 Kay/Pink Zone game as well as the Father-Daughter Game. Survivors will be honored prior to the game with a presentation of the game ball and t-shirts signifying their biggest defeat of all: cancer. Furthermore, each pair of father/daughter(s) that attend the game will receive a replica jersey and team-autographed poster for each daughter. The cost is $10 for each father/daughter pair and $4 for each additional daughter.

Links to the audio, video, and live stats will be available at valpoathletics.com.