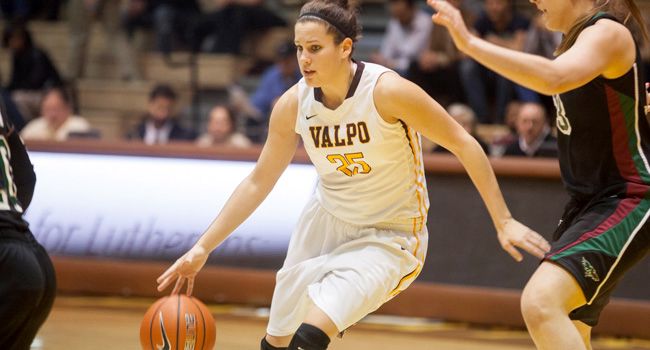 Senior Liz Horton was a perfect 6-for-6 from the free-throw line as part of a 10-point night versus Green Bay. (Avery Davis)
Green Bay at Valparaiso | March 01, 2014
Related Links
Related Links

The Crusaders were just three minutes away from snapping a 14-game losing skid to Green Bay, but Mehryn Kraker's three-pointer with 21 seconds to play helped the Phoenix escape with a 53-49 win Saturday night at the ARC.

Sharon Karungi (Kampala, Uganda/[Northern Oklahoma College]) had another outstanding game down low for the Brown and Gold as the junior led all scorers with 16 points. Karungi also hauled in ten rebounds for her third consecutive double-double.

Early on all signs pointed to a low-scoring affair as Green Bay led 6-2 at the under-12:00 media timeout. The Crusaders scored their first points at the 12:17 mark. Neither team reached double digits in points until eleven and a half minutes had elapsed. Sam Zastrow's fast-break layup gave the Phoenix a 10-6 lead.

Lexi Miller (Caledonia, Mich./Caledonia) knocked down a triple before Karungi capitalized on a Green Bay turnover. Liz Horton (Cannelburg, Ind./Barr-Reeve) fed the junior for a wide-open layup and the Crusaders' first lead of the night. Miller and Karungi repeated that sequence on the next two trips down the floor for a 16-10 advantage with 4:39 remaining in the first half.

The Phoenix closed the half on a 6-0 run to regain the lead at 23-20. Valpo held Green Bay to 2-of-18 shooting beyond the arc in the first twenty minutes.

Green Bay assembled a 14-3 run in the opening minutes of the second half as the visitors enjoyed a 37-25 advantage with 13 minutes to play. The Crusaders returned the favor with a 12-0 run to tie the game at 39-39 with just over five minutes left. They received points from five different players during the four-minute surge.

It remained a one-possession game until under a minute to play. The Phoenix were ahead 49-47 when they swung the ball to Kraker in the left corner. With the shot clock winding down, the freshman canned the three to put Green Bay ahead 52-47.

A Liz Horton layup with a second to go was too little too late as Green Bay moved to 11-3 in Horizon League play with a 53-49 victory.

Horton finished with ten points, six of which came from the charity stripe.

Miller turned in another stellar performance off the bench against the Phoenix. The sophomore was 3-for-3 from the floor, including 2-for-2 from outside, in a ten-point effort. Miller scored 13 points in 27 minutes of reserve time in February 3rd's tilt in Green Bay.

Tesha Buck led the scoring attack for the Phoenix as the freshman registered 14 points. Kaili Lukan pitched in 12 points as well.

Valpo will host Milwaukee (8-19, 4-10 Horizon) Wednesday evening in the final regular season home game. Tipoff is set for 7:05 pm CT. Links to the audio, video, and live stats will be available at valpoathletics.com.