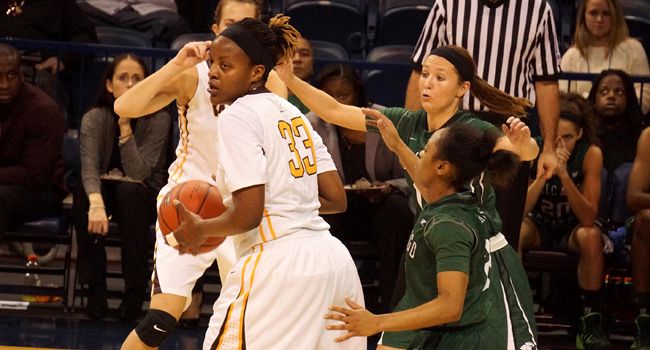 Sharon Karungi was 11-of-14 from the field en route to a 23-point evening
Milwaukee at Valparaiso | March 05, 2014
Related Links
Related Links

Valpo and Milwaukee's first contest of the season had no shortage of offense, and Wednesday night was much of the same as the Crusaders defeated the Panthers 94-80 at the Athletics-Recreation Center.

Charae Richardson (Lafayette, Ind./Jefferson [Vincennes]) scored a career-high 24 points as the fifth-year senior added five rebounds, three assists and two steals in her best overall effort of the season. Sharon Karungi (Kampala, Uganda [Northern Oklahoma College]) shot 11-of-14 from the field as she pitched in 23 points. Karungi has averaged 17.6 points per game since February 10th.

The two teams exchanged points on alternating possessions for the majority of the first half. Richardson had nine of Valpo's first 18 points as she tallied scores from the charity stripe, the paint, and from behind the arc.

The tilt stayed a one-possession affair for much of the first 15 minutes. A Jessi Wiedemann (Palatine, Ill./Fremd) three-pointer with 4:15 in the first stanza pushed Valpo's lead to six points before Karungi threw a layup in on a nice dish from Richardson.

Milwaukee scored the final seven points of the half to cut the Crusader advantage to 46-45. Ashley Green paced the Panthers with 17 points on 7-of-9 shooting as the Brown and Gold struggled to find an answer for the junior.

Valpo emerged from the locker room to go on a 19-2 run to expand its edge to 65-47. Richardson had six points during the Crusader surge.

The Brown and Gold maintained their double digit lead over the Panthers for the remainder of the period as a pair of Milwaukee technical fouls helped keep the Black and Gold at a safe distance.

Milwaukee cut the Crusader lead to 17 points on multiple occasions, but was unable to get any closer than 15 in the waning seconds.

Angela Rodriguez shot just 3-for-11 in the second half as the Panthers attempted to mount a comeback, but Valpo went no more than two possessions in a row without scoring as the Brown and Gold enjoyed a season-high in points. The Crusaders' previous watermark in offensive output was 85 points versus Detroit on January 23rd.

Valpo outscored the Panthers 48-35 in the second half to claim a 94-80 win in the regular season finale at the ARC.

"We made some much-needed adjustments on (Ashley) Green in the second half. She made some great plays. But I'm proud of our team's focus on getting the job done," head coach Tracey Dorow said.

The Crusaders (5-23, 3-12 Horizon) travel to Dayton Saturday to take on Wright State (22-8, 11-4 Horizon) in an afternoon tilt at the Nutter Center. Links to the audio, video, and live stats will be available at valpoathletics.com.