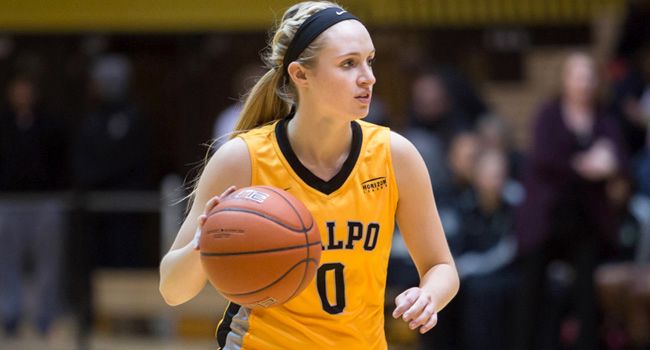 A career night from Jessica Carr (Arcadia, Ind./Hamilton Heights) was not enough for the Crusaders as they bowed out of the Horizon League Tournament following a 72-55 loss to Green Bay Wednesday night at the Kress Events Center.

Carr had a game-high 18 points as she put up personal highs in three-pointers (6) and rebounds (7).

The Crusaders led for the majority of the first half until a 24-7 Phoenix run put the home team ahead 31-21 with 1:39 to play. Lexi Miller (Caledonia, Mich./Caledonia) sank a three-pointer from the left corner before Abby Dean (Carmel, Ind./Carmel) converted on a pair of free throw attempts to move the Brown and Gold to within five points.

Out of a 30-second Green Bay timeout, Sam Terry made a layup in the final minute of the period to give the Phoenix a 33-26 halftime lead.

Carr was the driving force behind Valpo's strong play in the first twenty minutes. The junior was 4-for-7 from downtown as she had 12 first-half points. She also tallied two assists to just one turnover.

The Crusaders kept within single digits for the first four minutes of the second half. Jessi Wiedemann (Palatine, Ill./Fremd) drilled a jumper on a nice setup from Carr at the 17:15 mark. Following Wiedemann's two-pointer, the Brown and Gold went on a field goal drought that carried on until senior Charae Richardson (Lafayette, Ind./Jefferson [Vincennes]) deposited a triple with 10:03 on the clock.

Carr hit her sixth and final triple of the night just ahead of the final media timeout. Richardson followed with treys on back-to-back possessions with just over two minutes remaining, but it was too little, too late as Green Bay held on 72-55 in front of 1,428 fans.

The Phoenix outscored Valpo in the paint 38-8. Megan Lukan led the offensive charge with 12 points. Ellen Edison and Mariah Monke each pitched in ten points off the bench.

Green Bay also enjoyed a 28-11 advantage in points off turnovers. The Crusaders (6-25) committed 21 turnovers, one fewer than in their Feb. 3rd game against the Phoenix in the Kress Events Center.

Senior Liz Horton (Cannelburg, Ind./Barr-Reeve) contributed seven points including a 1-for-3 night from three-point range. Horton finished the season with a 39.8% percentage from beyond the arc, the ninth-highest number in program history.

Richardson had 12 points thanks to a nine-point second half. She ended the season as Valpo's leading scorer with 11.6 points per game.

Richardson concludes her two-year career as an 80.9% free-throw shooter (165-for-204). Though she failed to meet the minimum of 225 attempts required for the career free-throw record book, the senior would rank 8th all-time when given the minimum number of attempts.

As a team, Valpo shot 77.6% from the foul line on the season, a new program record.

“These seniors put down the foundation,” head coach Tracey Dorow said. “We hate losing, but we stuck together, and I really feel like there is a lot we have to look forward to. We gained a lot of valuable experience.”